"Tradition-Transmission-Transgression 2021" aims to reflect on the role of women in the transmission and preservation of several cultural traditions, and on the responsibility to transform them when these very traditions confirm a social perspective that does not guarantee equal opportunities and rights. 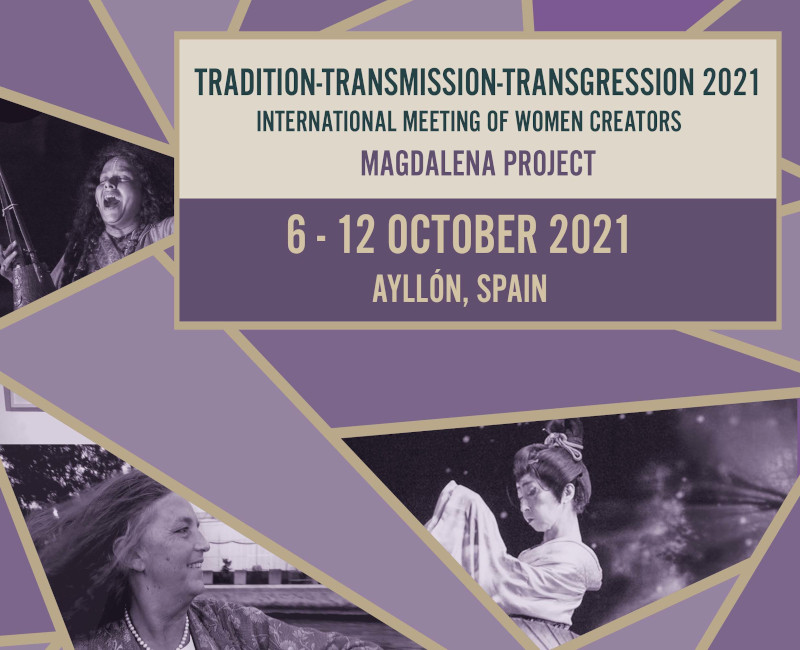 The meeting will take place from October 6th to 12th, 2021 in the beautiful municipality of Ayllón, Autonomous Community of Castilla y León, and provides workshops, round tables for reflection, concerts, exhibitions, shows and activities together with the local community.

The meeting foresees the presence and participation of Spanish and international artists who are promoting initiatives that favor the visibility of women in the artistic field, using art as a tool for social transformation. The meeting will be open to anyone who is interested in reflecting on the theme of the meeting, using the arts as a tool for personal and community transformation.

People interested in participating in all the training proposals provided for by the meeting, and who come from outside Ayllón, will stay in the same place as the invited teachers and will carry out an intensive and residential reflection experience.

The round tables, work demonstrations, exhibitions and shows will be open to all interested persons.

Among the invited masters:

Julia Varley (Great Britain) joined Odin Teatret in 1976. Apart from acting she is active in directing, teaching, organising and writing. Since 1990 she has been involved in the conception and organisation of ISTA (International School of Theatre Anthropology) and of the University of Eurasian Theatre, both directed by Eugenio Barba. Since its beginning in 1986 she has been active in The Magdalena Project. She is also artistic director of Transit International Festival, Holstebro, and editor of The Open Page, a journal devoted to women's work in theatre..She is co-founder of the Barba Varley Foundation.

Jill Greenhalgh (Wales), has been a professional theatre maker since 1978. Her career as a performer, director and producer has primarily focused on experimental physical practice. The specific interest in the performance work being developed by women resulted in the foundation, in 1986, of The Magdalena Project—International Network of Women in Contemporary Theatre, which has since grown into a worldwide organisation with ongoing activities in 25 countries. Jill remains the Founding Artistic Director of this Project. www.themagdalenaproject.org

Geddy Aniksdal and Anette Röde Hagnell (Norway), artists of the Grenland Friteater company, a reality that began in 1976 and is the longest-running free performing arts group in Norway.Their productions range from the intimate experimental to the spectacular on-air events free. Grenland Friteater has a long history of creating features that go out of the box.

Keiin Yoshimura (Japan), Japanese multi-talented artist, dancer of the ancient Japanese dance Kamigata-mai, one of the few women who have performed at the Noh Theater, singer of Gidayu-bushi (storyteller in the Bunraku), actress of Kyogen theater, musician from Shamisen.
She is a deep connoisseur and teacher of: Shodo (Japanese Calligrapher), Kendo (martial art with a cane), Kyudo (martial art), Waka (Poems in 31 syllables) and Haiku (minimum poem in 17 syllables).

Parvathy Baul (Kerala-India) Baul music singer and Indian storyteller. She is one of the most recognized artists of Baul music from India. She was trained under the tutelage of gurus like Baul gurus, Sanatan Das Baul, Shashanko Goshai Baul in Bengal. She is one of the first women to study, and now teach, the Baul chanting technique, only practiced by men for centuries in northwestern India, present-day West Bengal, and Bangladesh.

Voix Polyphoniques (France), Brigitte Cirla ​​and Eléonore Bovon.
Brigitte Cirla, singer, actress, director and teacher has directed Cie Voix Polyphoniques for 30 years. She creates musical theater shows in France and internationally performed in various languages. She is also a choir director and as such conducts various vocal groups in Marseille.
Eléonore Bovon: Singer, writer, composer, vocal coach, choir director, she creates meaningful projects portraying a wide range of emotions, involving from 2 to 50 participants, dealing with societal subjects, in every kind of contexts, for every kind of audiences, all over the world. She has developed for more than 20 years a pedagogical system of voice and song aimed at all people of all ages, of all nationalities, in all types of social context.

Amaranta Osorio (Mexico-Colombia-Spain) is an author, actress and cultural manager. As an author, she has received several awards and her works have been presented in various countries and translated into five languages. Since 2019, she has been a beneficiary of the National System of Creators of FONCA (Mexico). In Spain, he received the awards: "Calderón de Literatura Dramática" (For the work CLIC, when everything changes, written with Itziar Pascual), the "Premio de Textos Teatrales Jesús Domínguez" (For the work Moje Holka, written with Itziar Pascual) , among others.

Isabelle Maurel (France), Dancer and choreographer, is also a teacher of African dance, improvisation, history of African-American culture and pedagogy since 1999; she has managed to keep Katherine DUNHAM's heritage alive and precise for young contemporary dancers. Since 2002, she has directed street performances, dance theater happenings and choreography, and community dance projects.

Itziar Pascual (Spain), is a playwright, pedagogue, researcher and journalist. She won the 2019 National Performing Arts Award for Children and Youth. She has a PhD in Information Sciences from the UCM and a higher degree in Dramaturgy from RESAD. She has been a Dramaturgy professor at RESAD since 1999. As a playwright, she is the author of more than thirty dramatic works, awarded, premiered, published and translated into different languages.

Mónica de la Fuente (Spain), is an actress, dancer, choreographer and artistic director of the Mónica de la Fuente Company. A pioneer in Spain in the studies and research of the performing arts of India and the adaptation of it to a contemporary context, she develops several lines of research in voice and movement, theater, flamenco and India.

Carmen Gallardo (Spain) (to be confirmed) co-founder in 1983 of the Atalaya company that obtained in 2008 the National Theater Award, of which team she is a stable member. In 1992 she directed Agujeros and founded Teatro Crónico. She teaches workshops at the TNT International Laboratory and leads the training of young actors from Atalaya.

Viviana Bovino (Italy), actress, dancer and pedagogue, investigates different dances and traditional disciplines connected with the holistic body, drawing on the principles that allow the creation of her own signs. She walks the bridge between dance and theater, singing.

Katarzyna Bak (Poland) painter and graphic artist. She exhibits at the meeting the works "The theater of women"

Eirini Sfyri (Greece) actress, creator, pedagogue, graphic artist; she co-founded the non-profit physical theater company “Theatro eF” and of the artistic association “Les souterraines” in Bordeaux (France). Since 2017 she is member of the international Residu Teatro laboratory, where she also coordinates the activities of art education for kids in the Casa de las Artes y del Juego project.

Posted by:
RESIDUITEATRO
26/08/2021
send mail to
the Magdalena Project