Tantidhatri is India’s first International Women’s Performing Arts Festival. Its first edition took place in Pondicherry in 2012 and the second, in Bangalore in 2016. This third edition, will take place in Kolkata from 15th till 20th of January 2019. Tantidhatri aims at being a space of engagement for artists, thinkers and groups that are committed to women’s work in the field of performing arts.

The festival will donate its surplus amount for education of girl children in India. Although physically it is a five day event filled with performances, critiques, talks and interactions, the spirit of the Tantidhatri is universal and not bound by time or space. This year the theme is ‘Energy’ and through the festival, we will be channelizing all our efforts towards the positive flow of energy in all things physical and meta physical. 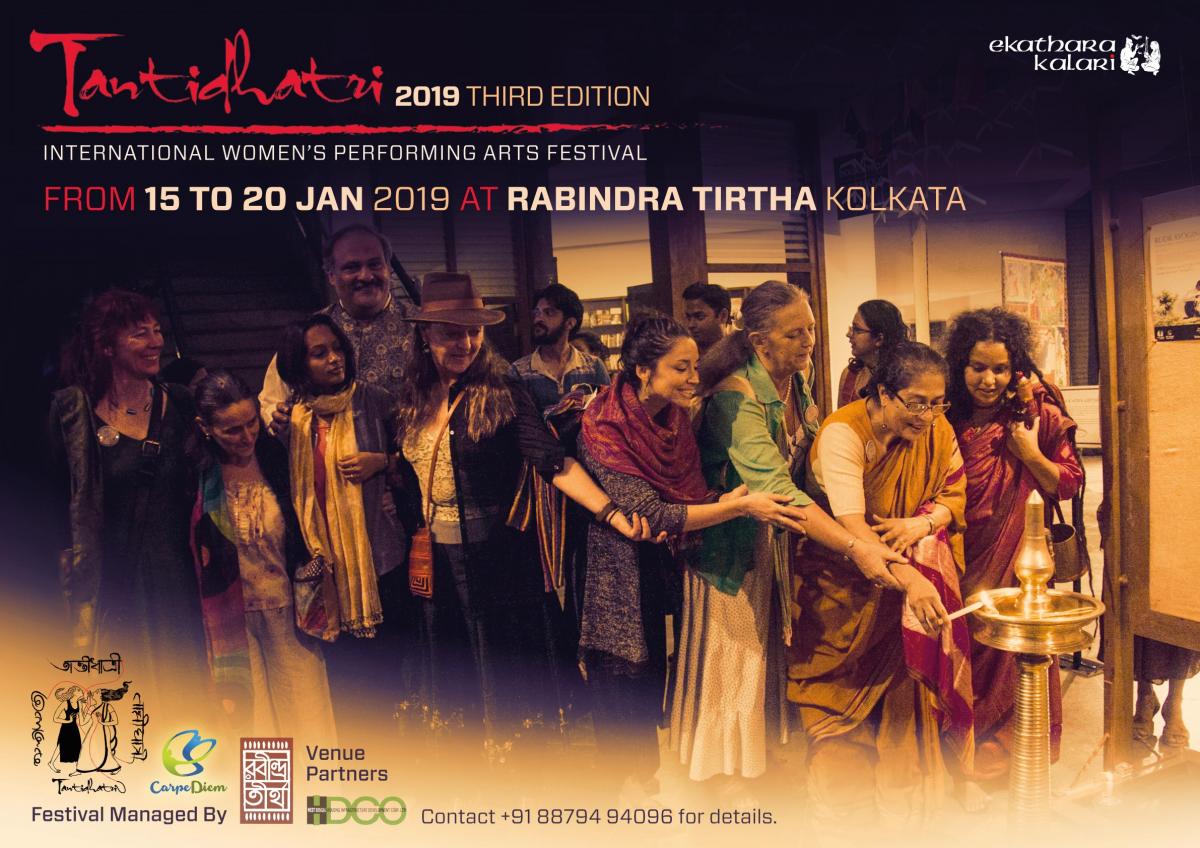 ‘Tanti’ in the ancient Pali language, is imagined as a thread going beyond time; and ‘Dhatri’ is the woman who holds it. In the language of performing arts, this thread can have various meanings. It could be lineage, generations, teacher-student relationships, independent auto-didactic realities, the practice of workshops and training, traditional schooling in performing arts all over the world, the passing on of a craft through family connections or apprenticeship, or the absence of references. In this context, it symbolizes how performing knowledge and practice is transmitted from one generation to the other.

Tantidhatri brings together the performance works of women masters across the globe (both created from self-expression and sacred arts), ranging from Theatre, Music and Dance, to the Visual Arts, Ritual and Spirituality. It brings together a generation of women who now embody life-experience in their works, and who will share these experiences generously with their audiences. Tantidhatri Festival is an occasion to meet these women master practitioners, artists, intellectuals, writers and scholars from various backgrounds and lineages, as well as interact with them through workshops and talks.

Tantidhatri is inspired by Transit Festival created by actress-writer Ms. Julia Varley of the Odin Theatret, Denmark, who is also a founder-member of the Magdalena project. Like Transit and The Magdalena Project, Tantidhatri Festival in India is committed to nurturing an awareness of women’s contribution to the performing arts and to support exploration and research by offering concrete opportunities. Tantidhatri Festival encourages women to examine their role in the future of theatre and performance, by presenting their work, sharing methodologies, examining form as well as content and venturing into new collaborative projects.

Tantidhatri 2019 - We need your support!

The festival will donate its surplus amount for education of girls in India. Although physically it is six days event filled with performances, talks and interactions, the spirit of the Tantidhatri is universal. This year the theme is “Energy” and through the festival, we will be channelizing all our efforts towards the positive flow of energy.

Posted by:
Amaranta Osorio
12/08/2018
send mail to
the Magdalena Project