Documentation from the festival:

The possibility to create a safe gathering space has inspired me to continue working to share the privilege of those meetings. From the first call in 2005 my tendency drives me to favour issues related with craftsmanship, with the problems of the trade, as if I could sense that all the time we avoid collectively discussing or thinking about the nature of the work that unites us all: theater. On the other hand I am very far from those idle and useless practices which tend to construct theories or exert criteria of truth based only on individual artistic results, deliberately ignoring the personal biography, the turns, the diatribes and the specific contexts in which each work accomplished to attest life. I do not think that the soul separates from the roads where we all fight for and defend the theater we do, but the theater we do, so different in each case, comes from a precise inspiration and has too a precise language. "Every inspiration brings its language" said José Martí, the Cuban revolutionary and poet. 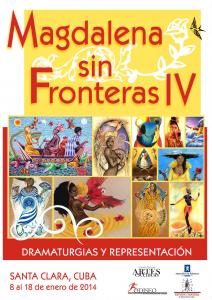 Magdalena Sin Fronteras IVI want to emphasize the themes of theatrical creation. I want to insist that every artist tries to communicate with an equivalent language the mechanisms that articulated their invention processes. I want each one of us to try to approach from its practice and its history to the subject of dramaturgies and representation, as a testimony of a process in process within a precise reality subjected to change and doubts. I'm obsessed by the brutal pragmatism that go across our world and the possibilities we have to eloquently pass our experiences, thoughts that can create illusions and sustain the sometimes unstable way of many young people who want and need a voice within such human misery. We cannot change the world, but we can, from our craft and conviction in what we do, go against the consumer attitude that pervades all areas of our lives, and also of thought and theater. That is why I insist on speaking of the craft, it seems idle but is not, our craft is our true heritage, and by believing it so precious and knowing it so fragile, we walk against the flow of consumption that always invites to bet to what is safe and to all kind of short time profits.

From now on I hope to continue weaving all these conversations and to open questions and continue growing concerns that inspire us not to go further but to go deeper.

Information and documentation about the third Magdalena Sin Fronteras festival (2011), including a video of highlights, is available here.