Jill Greenhalgh explains how the Magdalena Project got its name. 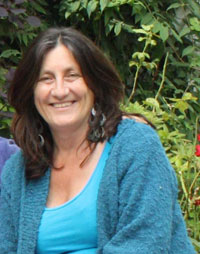 Whenever I am asked why the name "Magdalena Project", I say: "Oh, because I had a deadline, it was the only thing I could think of. I had an obsession with the figure of the Magdalene and thought okay that will have to do"  This is true, but only one side of a truth. The depth at which her story eludes, but still pumps through the veins of western culture; and the imperative that her story be revived in her own words is the other side to the truth of this choice.

Perhaps I am enacting a distortion of history, to fit my contemporary consciousness, but the more I delved, the more my exploitation evolved beyond her signifying simply a figure of liberated female sexuality, which was the primary attraction to this figure when I was in my twenties and somewhat ‘wild.  She began to emerge as a representative of the complexities of my political and feminist concerns. She became a symbol of the silencing of womanhood, and the essential nature of womanhood - the silenced story, the other side of the story. The female side of the story which, remaining untold and unassimilated, allowed the rise of unbalanced and repressive social structures.

The silencing of what I decided was the authentic story of the Magdalene became a symbol of the perpetual lie. The burial of the words and experience of this woman is the lie, the political and religious stratagem, that soon became a bedrock of the patriarchal misogyny that perpetrated 2000 years of western history. And perhaps, the most virile distortion is the undermining of the Magdalene's role as first, and chosen, witness to the resurrection, arguably the most potent of Christian symbols. Simply, the Jewish social structure of the day could not allow a woman to testify as sole witness to an event of this magnitude, whether the actual event was real or metaphorical.

Adapted from the article "Women in Red" by Jill Greenhalgh, in The Open Page: Theatre, Women, Character (2003); read the full article here.