Neverending Circles: Women's festivals and the lack of funds

This year is a big Magdalena year for me - meaning that I was invited to several Magdalena festivals. I am honored by this, and feel lucky to be part of this network of amazing artists.

In the winter I was part of the Magdalena Munich Season 2018, curated and organized by Helen Varley Jamieson. This was quite different from other Magdalena festivals - spanning three months of women's theater and performance, rather than cramming it all into a few days. It also meant that out of town artists received residencies as part of their participation. So for the whole month of February, I was a resident artist at the Villa Waldberta – a luxurious mansion, where I had my own apartment and training space (with floor heating and the possibility to rig my equipment!). There were common rooms, beautiful salons, a romantic tower with a view over Lake Starnberg and a huge communal kitchen. It made working and creating a real privilege for me and my fellow residents (Zoe Gudović, Deborah Hunt, Thaís Medeiros, and Kordula Lobeck de Fabris). This is exactly how artistic creation should be! As well as the spatial possibilities, there was the respect and official appreciation as artists: not only did we receive a stipend for our stay, we were official guests of the city of Munich. 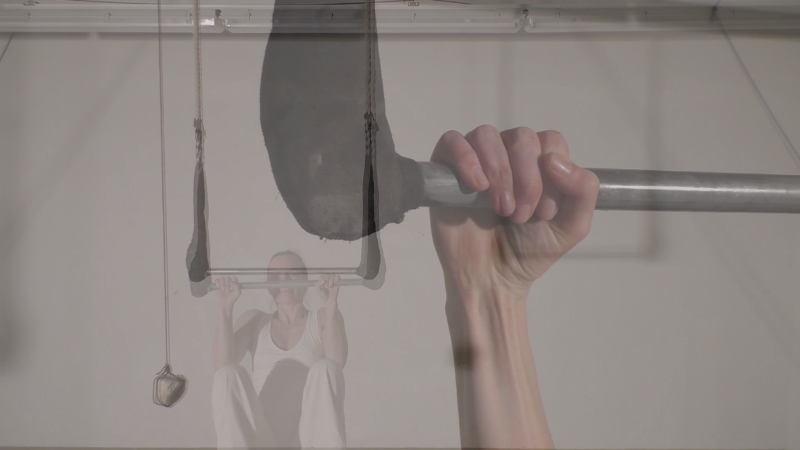 ay sound strange that I was so grateful for this opportunity - after all I am a white academic cis-gendered woman living in Germany, one of the wealthiest, and (still rather) democratic countries in the world. Doesn't this look like privilege all over? Yes it does, and it is. But to succeed as an academic woman artist in Germany, creating in the marginal genre of circus arts and taking a feminist stance within her work, also means the lack of funds and lack of recognition. It takes an overwhelmingly big capacity to persevere. It feels like an exception to be taken seriously as an artist by the official world.

In May I flew to Prishtina, Kosovo, to perform in the beautiful and extremely relevant Femart festival, curated by Zana Hoxha Krasniqi, another Magdalena. Unfortunately it was the middle of my performing season, so I couldn’t stay longer than two days. But I saw one other performance by a Bulgarian ensemble, and a new mural, dedicated to women who are supposed to run the show. (I still cannot believe that I didn't get to see Jill Greenhalgh, who was there at the same time, even at the same hotel...).

In November I will fly to Brazil, to the Multicidade Festival in Rio de Janeiro. Finally! After trying to invite me for two years - the political situation there is grim - I am finally going, together with my partner/technician. I am really excited about this, because I have never been in South America. I will perform "Paper Dolls - Aerial Theater", a piece after a novel by Margaret Atwood. Once the festival is over, we are taking the time to visit other places and perform at other venues. I am learning the text of my Kafka piece in Portuguese right now!

There is one thing though, running like a black thread through all our Magdalena events: the lack of funds. Most Magdalenas organize amazing, exceptional festivals without any real money, supported by artists who perform and teach for next to nothing. That is what I did in Munich, where I received only the stipend for my residency – despite their best fundraising efforts there just wasn't anything more for my performances and workshop. In Prishtina also they were really sorry that there wasn't enough money to pay us artists adequately. For Multicidade it will be the same, it took two years to raise the funds to fly us over, and they already apologized that my artist's fee will be rather symbolic. In all three cases, I really wanted to be part of it, I wanted to connect with other women, meet extraordinary artists, party and drink with them, and create new co-operations. But it also means that I support these festivals, and that they could not exist without us artists forgoing proper payment.

At the moment I am trying to raise money here in Berlin to be able to come to next year's Transit festival with my new performance (about the Medieval anarchist writer, Marguerite Porete) - because even Transit, our biggest and most renowned Magdalena festival, also has a limited budget.

This is not just a Magdalena problem. It is a problem with all women's, feminist, counter-culture, and other marginalized arts festivals that I have encountered. I myself had to cancel my Luftartistik Festspiele Berlin (Aerial Arts Festival Berlin) due to insufficient funding this year.

Sometimes I really hate that we are doing this to each other. It is a neverending circle. Of course we want festivals to happen, of course we support all of this. We receive so much from these meetings, our art gets seen, we propel each other forward with our feedback and are inspired to create new art. But it also means that we have to work so much more in beween, that we have to accept gigs where we do not find respect, where we get sexualized, where we have to compromize. At least that is my reality as a freelance circus artist and performer in Germany.

I wish we were in a situation where we could organize amazing and relevant festivals with sufficient funding and monetary support to support each other not only by cultural and social capital, but with real capital as well.

So let's focus on this even more, let's get creative!
See you soon!

Submitted by jana korb on 4 October 2018.
send mail to
the Magdalena Project