The Most Happy Day In My Life

We came from far far away,
To share with you the feeling and knowledge of our land.

Colombia is the land of flowers and butterflies,

Argentina has alpine, plains and leisure,

I come from Taiwan; she is the land of rice and tea,
Bananas, watermelons, guavas, and mangos.

We traveled many towns,
There are still quite a few frozen pumpkins since last winter.

In 2019,Taiwan's Ministry of Culture encouraged artists to make cultural exchanges with Latin Americans. I was invited to Argentina for MAGDALENA 2a GENERACIÓN in April and XXVlll Festival  Mujeres en Escena Columbia July. In return, in October 2019 I Invited to Taiwan Ana Woolf and Marcela Brito from Argentina, Eléonore Bovon from France, Sofía Monsalve from Colombia and Andre Pulls from Ecuador.

This cultural exchange is not going to perform in a theatre stage and is more than a performance. I went to remote hamlets where foreigners rarely appear and asked the head of the village, what is the most distinguishing feature of their village? It could be singing, dancing, tea making, tea ceremony or any performance of folk art, so that when the foreign artists come, they could perform it or and show the visiting guests how to work with it.

Ana Woolf, Marcela Brito, Eléonore Bovon, Sofía Monsalve and Andre Pulls visited 10 villages in 10 days: they learned Hakka songs/music when they went to the Hakka villages; learned the Dwarf Sacrifice Hip Bells dance in an aboriginal village; and joined the Hakka lion drum and lion dance when they went to a very small primary school, located in remote mountains only with twenty or thirty students, to do the cultural exchange. The most important thing is exchange. In the process of exchange, Ana Woolf played Niki the clown, and brought a lot of joy to the public. Eléonore exchanged singing with young children - children sang in Mandarin, Hakka or an Aboriginal languages, while Eléonore also exchanged and learned songs in Mandarin, Hakka or an Aboriginal languages, then Eléonore sang in French, and the children sang in French. Wonderful things happened. The children were so naturally involved that they were not disturbed by what was unfamiliar.

Sofía from Colombia taught everyone to sing a song about the Amazon forest. This song with simple dance steps is very similar to the dance steps of the indigenous people of Taiwan. In particular, Sofía asked the children to invite the animals of the Amazon to save the forest together during the show. This nonverbal part made children very excited to call for monkeys, elephants, tigers and lions and more, at the same time to feel environmentally friendly and feel that we are the same, we are a part of the earth, we are children of the earth, and we should protect our environment and save the earth together.

Marcela brought some unique Argentine folk songs. For example, we came to Nan-Pu Village. This is a small village with less than 200 people. Because the village is so clean, bee-keeping can make everyone live a good life. Marcela therefore sang a love song for them, an Argentina song about bees to convey love for nature.

The most special part of the activity was a parade in the rice field. The members of Uhan Shii theatre handed some props to the participants, Ana Woolf played accordion, Sofia was on stilts, Eléonore played violin, Macela and Andre played percussion. We followed as Ana Woolf walked into the autumn of Taiwan, into the rice field where rice ears were full. The green rice field with Latin American songs and Hakka traditional music that made the parade very contrasting and simultaneously showing that we are all the same, the children of the earth. 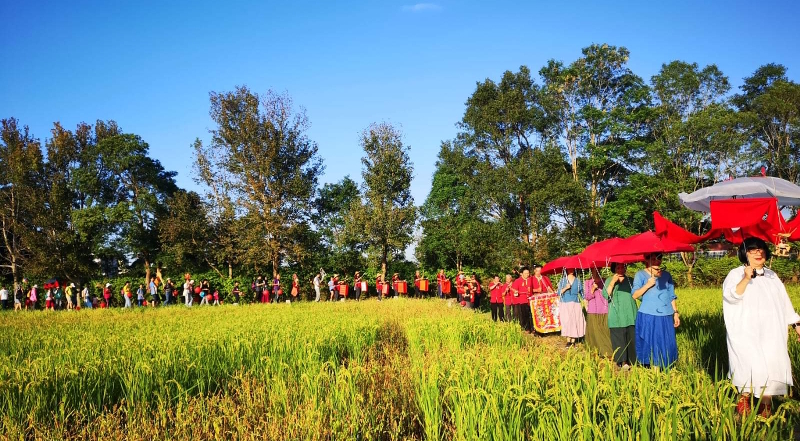 In the past, it was only work, very hard work in the rice field, Yet, this time, all the people, adults and children, came to the rice field to have fun. Also the music in the village was Hakka music only. Now the music of Argentina, France, Colombia and Ecuador was played in these remote villages of Taiwan. Never before had the local people had such an extraordinary exchange experience. 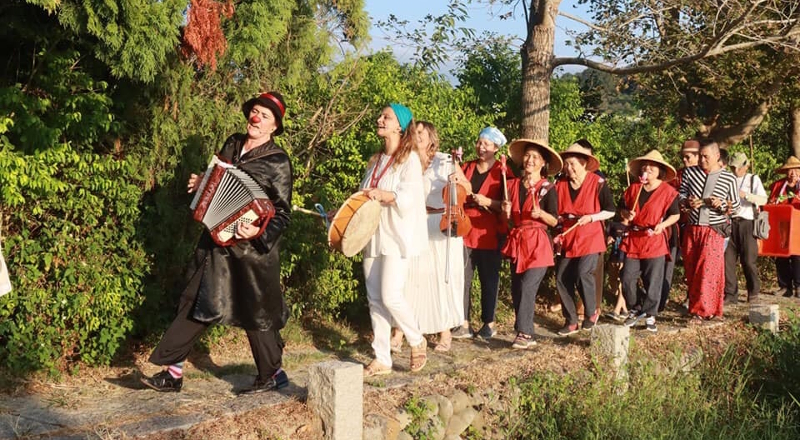 I have one more story. When I was communicating with the local villages, one of the villages refused when I invited them to prepare traditional Hakka music. First they told me that they are not good at singing. Then they said that they only want to sing popular songs because traditional mountain songs are only for old men and old ladies. They don’t like the style any more. They even told me they won’t join in so I’d better not come to the village again! I still went; I went to the village often. When they were picking vegetables, I squatted beside them helping quietly; when they were selling vegetables, I helped too; when they went to sing Karaoke, I ask their teacher to teach them Hakka mountain songs. I was very surprised that they could easily sing Hakka songs. The Hakka songs that were in their life a long time ago and that they had forgotten and considered vulgar and not worthy of exchange with foreign artists, yet it was so easily to pick them up again and as long as they practiced, they sang well.

On the day of the performance, they were still worried that the Hakka mountain songs were too vulgar, and asked me if they could perform modern pop songs in front of foreigners. But I still don't give up practicing traditional Hakka folk songs with them; in the end, their singing was very energetic and very exciting, and aroused a warm response.

With this full emotion, everyone followed Ana Woolf into the rice field, the field that they are familiar with, and every villager was inexplicably moved. There was a villager who held a rooster in her arms when we were walking into her field, where the rice was nourished with her sweat. She pulled my hand and said “Ya-Ling, this is the most happy day in my life”. 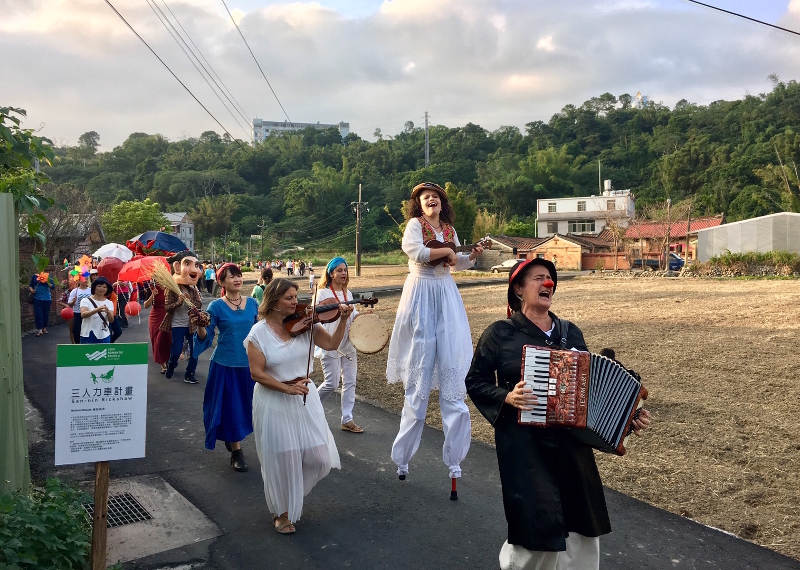 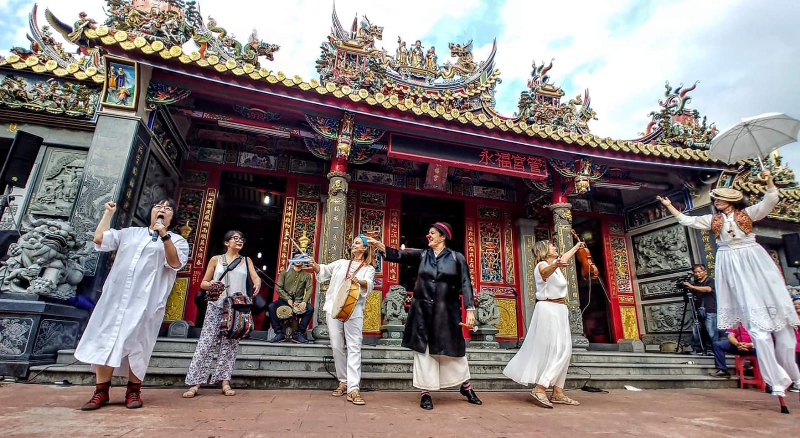 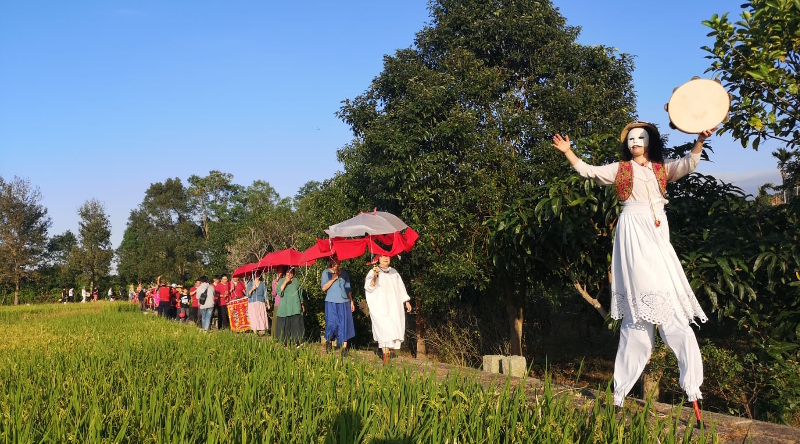 Submitted by admin on 31 March 2020.
send mail to
the Magdalena Project