Life between COVID-19 and revolution

I am writing you a letter from Brest, Belarus. I want to share my feelings of life between COVID-19 and revolution.

This year started with the pandemic which turned our lives upside down. We found ourselves separated from each other. Governments closed the borders. Many people got sick, some died. Many became poorer and lost their businesses. There is a specific situation in Belarus. Lukashenko did not recognize the existence of COVID-19. We did not have quarantines, people coped with the situation as best they could, gathered money for doctors and the medical system. During this period Belarusians demonstrated miracles of solidarity and self-organization, which undoubtedly helped us, starting from August. Today Belarus is virtually cut off from the world, almost all countries have closed their borders to us. In such circumstances, the revolution started in Belarus. 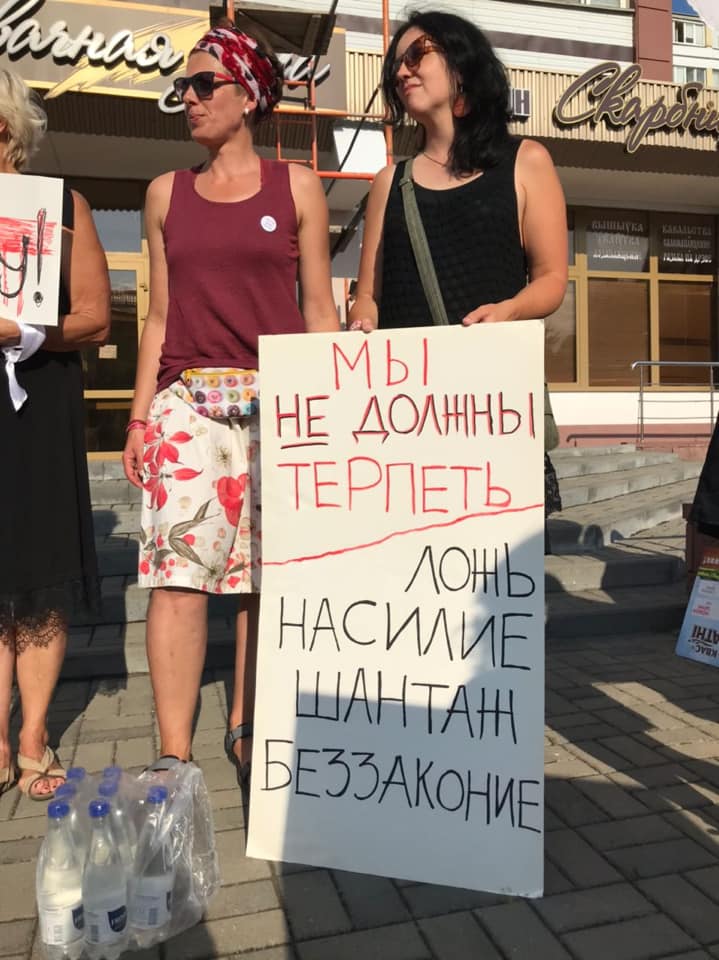 On August 9, presidential elections were held in our country, which were accompanied by numerous violations. The strongest male presidential candidates were jailed prior to the elections. They were replaced by women - their wives, or members of the headquarters, like Maria Kolesnikova. Lukashenko's mistake was in his sexism, in the fact that he did not believe that a woman in Belarus could win the presidential elections. He allowed Svetlana Tikhanovskaya to become a candidate and he miscalculated. This was the beginning of our "women's revolution".

For 26 years, Lukashenka destroyed opposition, any strong opponents were either imprisoned or forced to leave the country. Any protests in past years have been ruthlessly suppressed. A meeting of more than three people on the street can be interpreted as an unauthorized meeting, and according to the law, the police can take you away. Art and journalism are censored. My theater was censored and couldn't perform in Belarus for several years. Belarusians got used to live in fear, so what is happening today seems even much more surprising. Lukashenko has been in power for 26 years and continues to keep his power with all his might. The election results were once again rigged. People, dissatisfied with the deception, went to the streets on August 9 and have not left them for more than 50 days.

The first week of protests gave birth to the first victims, but also euphoria. It seemed to us that we won. People were on the streets every day, used different forms of protest, from the actions of artists to thousands of marches and strikes on factories. On August 12, women went to the streets and stood with flowers in chains of thousands along the roads. They went out and stood every day, and the authorities did not know what to do with them.

But after a few days, the authorities “woke up” and started to brutally suppress any kind of protest. The streets during Sundays' protests are filled with military machines, avtozaks – ‘prisons on wheels’, water cannons, buses with tinted windows, in which OMON (a special police detatchment) arrives. People were beaten and tortured in prisons. There are numerous cases of sexual abuse. Several people were killed. Not a single investigation was opened into the beatings. Today, the protesters have 3 demands: stop violence on the streets, punish those responsible and hold fair elections. 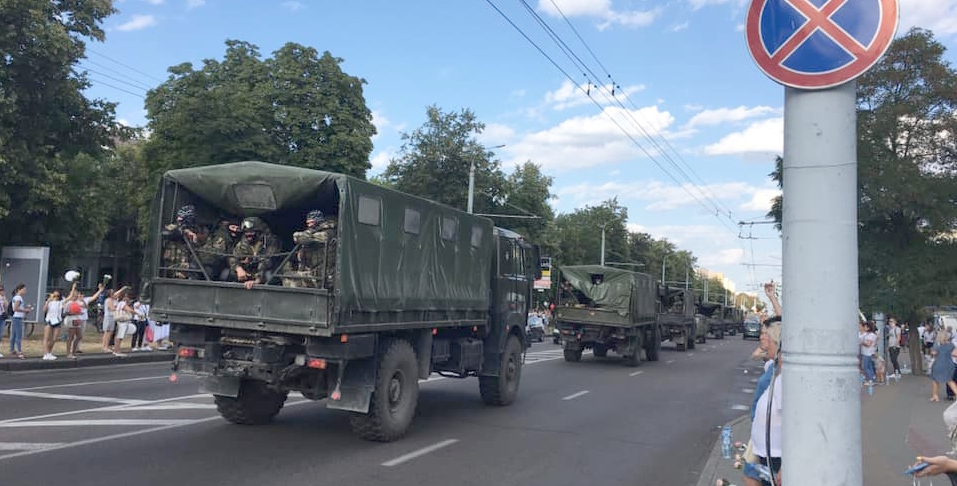 Today the authorities are represented by OMON in balaclavas, the police, the military, and groups of people in civilian clothes who wear balaclavas. Nobody knows who these people are, they are without any uniform, they can come into your house and take you to prison. The country is ruled by a junta. The law stopped working in Belarus. Courts make decisions based on not law but ideology. The military, who have stained themselves with blood, anticipating punishment and the tribunal, are trying to suppress the protest. The leaders of the protest were forced to leave country, as Svetlana Tikhanovskaya did, or are in prison. They wanted to throw Maria Kolesnikova out of the country, but this brave woman tore her passport right at the border. And the next day she went to prison.

Today many of us are very scared. But every Sunday thousands of people gather at marches. People show fantastic solidarity and come out to support political prisoners, workers' strikes etc. During one and a half months, Belarusians have passed the path of becoming a nation, which was suspended by the Soviet Union and the Lukashenko regime. And Belarusians are fantastic today and are doing incredible things! 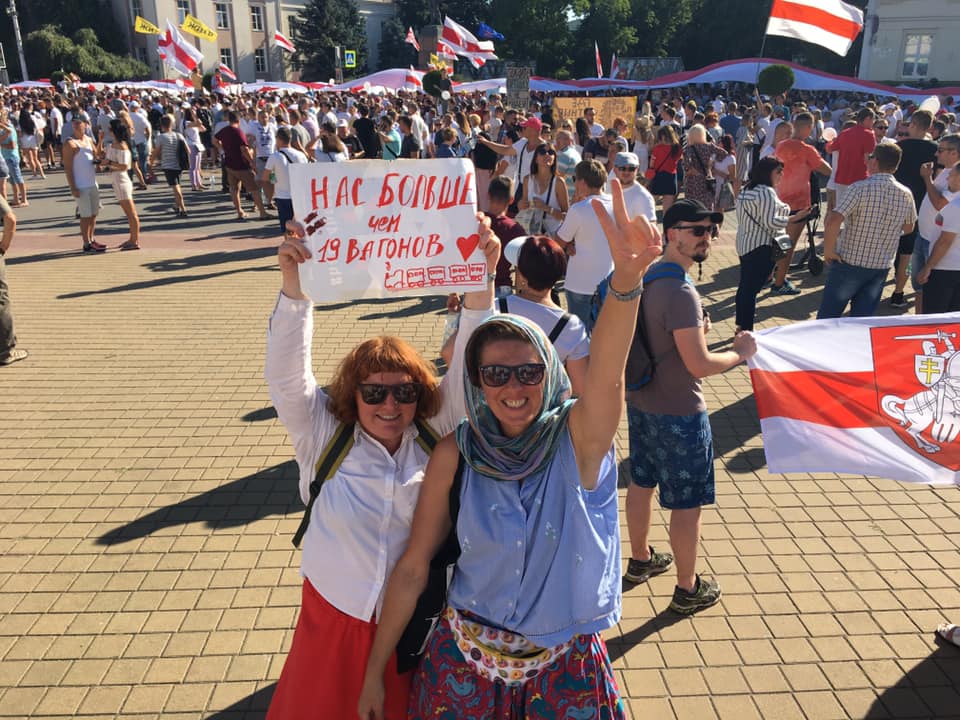 Many of my friends are now in prison or out of there. Some people left the country. Someone gave up, someone was beaten, and now they are afraid to go out. Someone is afraid for their children. Most of the protesters are exhausted, some are depressed, but people are not giving up.

I work as a director in KX Space. It combines a theater, a contemporary art gallery and a venue for cultural and educational events. We have managed to adapt our activities to the pandemic. We were one of the first to go online. I managed to create a Forum-performance online in July ... Today we have a new, more difficult challenge. I am looking for ways to continue our work, to help the protest with our activities. At the same time, we have to do it carefully and to stay in freedom. We organize meetings with psychologists to deal with traumatic shock. We held an exhibition about people losing face in the system. Hundreds of people came to visit it! We show and discuss films with protests connections. I urgently changed my unfinished feminist performance - now it will include photos and poems about our women's revolution. We are preparing an exhibition of art that is now born in prisons. We go out to marches and courtyard meetings, which have become a new form of community integration ... Today we are learning revolution. 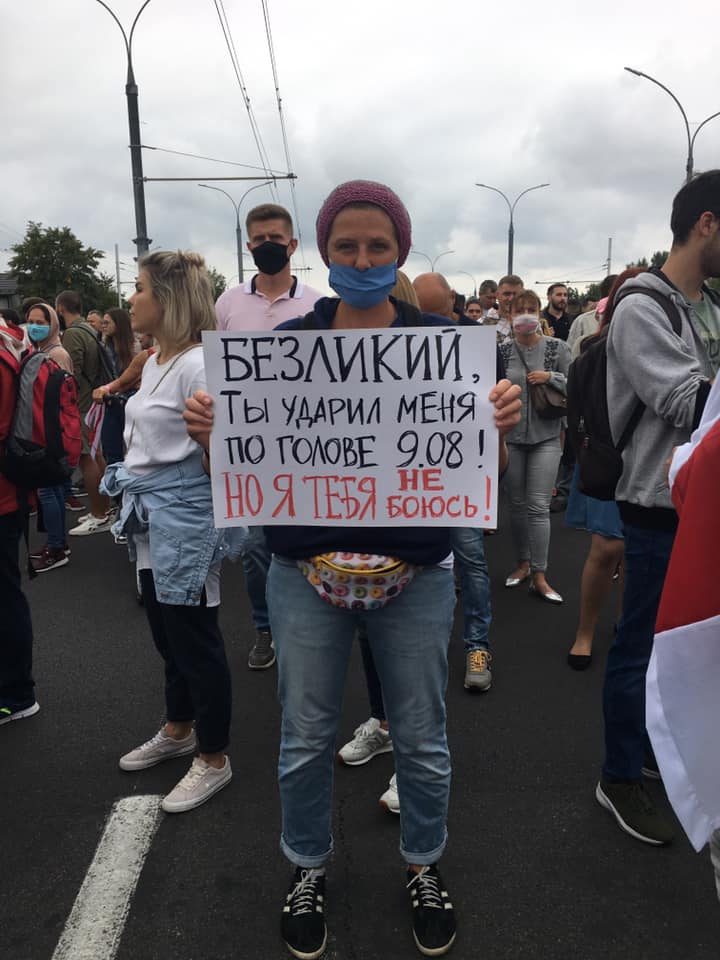 I have a bag behind my doorstep that I’ve prepared in case I go to prison. I no longer live with the door open as before, because they can come at any moment. Now I have an advocate. Administrative Procedure and Criminal Procedure Codes are lying on my dinner table. I fight fear, I fight paranoia. I do not sleep well, like most of my comrades. I fight claustrophobia because borders are closed. I take pills. I am worried about my 16-year-old daughter, who in the first days of the protest disappeared for a day at the barricades. My daughter was convicted of political graffiti. I stamp my feet in anger because my friends no longer come to visit me from abroad. I dream of going to an artistic residence anywhere in order to relax a little. And all my artist-friends dream about the same. I think with fear about a new round of COVID-19, because now we are all the time near a large number of people, and we can`t declare quarantine! Belarusians today wear masks not because of COVID (almost everyone has forgotten about it, and Telegram chats created to support doctors in COVID situation today also talk about revolution). Belarusians today wear masks to hide their faces, and from both sides.

I'm tired. I want to do my job and my theater. I want political prisoners to be released. I want them never to be. I want fair elections. I want freedom, equality and justice to reign in my country. I have been working for this for 20 years in my theater. I want my daughter not to run away from the country, like all her peers. I want us to win. We have no way back. If we retreat, we will face much worse repression. I want our victory. I want the victory of our women's revolution! 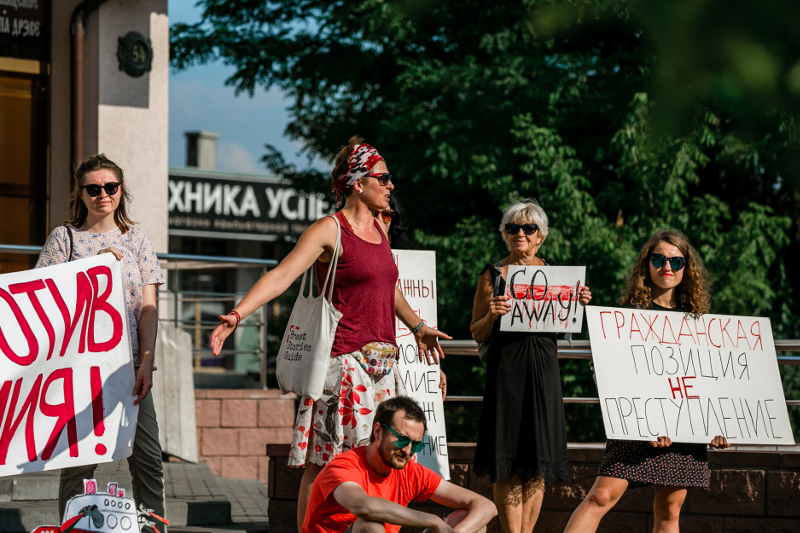 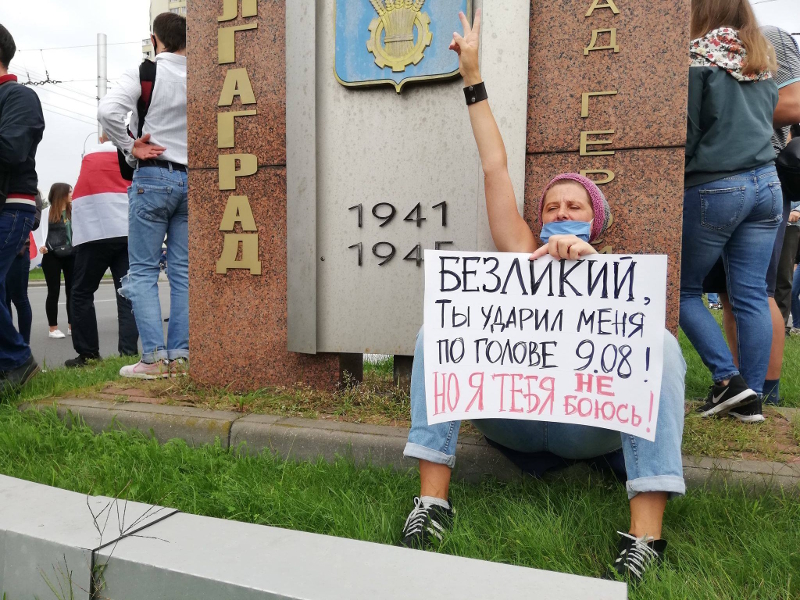 Submitted by krylyhalopa on 3 October 2020.
send mail to
the Magdalena Project