Women in Jalalabad Speak Out Through Theatre

New York, NY, March 7, 2012 - Bond Street Theatre returns to Afghanistan this month to help revitalize the theatrical arts and promote the use of theatre to bring information on health, civic rights, and other issues to areas of high illiteracy (90% for women, 63% for men, UN Report).  In many areas, the company is preparing women to take the stage for the first time to reach all-female audiences.

On March 31, three Bond Street actor-educators begin working with the Nangarhar Provincial Theatre in Jalalabad as part of its Theatre for Social Development project.  The two-year project, supported by the US Embassy in Afghanistan and the US Institute for Peace, involves month-long training sessions with four select theatre groups in Herat, Kabul, Jalalabad and Kandahar in creative and business skills.  The goal is to build the capacity of local theatre organizations to provide educational services on an ongoing basis to their communities and carry information to isolated areas, with a special focus on women and children. 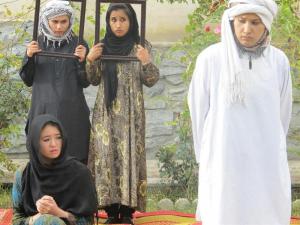 The Nangarhar group will bring female actors into their permanent company for the first time.  Prior to this, the company cast men to play women's roles.

Theatre in Afghanistan was all but decimated after decades of war and suppression by the Taliban.  Bond Street Theatre's ongoing project revitalizes theatre in the provinces, training artists and assisting the creation of all-female theatre troupes to perform for women and girls.

The gap in access to information is particularly acute in poor and rural communities and among women, who are more apt to be illiterate.  Theatre is an effective means to present information in an entertaining visual and verbal manner.

As Artistic Director Joanna Sherman said in a recent interview, "If you want to get information to areas of high illiteracy, you can't just hand out a flyer.  We are bringing crucial information to life."

The Nangarhar Provincial Theatre Company, part of the country's National Theatre system, was revived in 2001 after disbanding activities during the war.  Since then, it has earned recognition at the Kabul International Theatre Festival for its creative work.  They have produced four films, seven TV dramas, and many stage plays, including mobile theatre dramas to increase public turnout in the presidential, parliamentary, and provincial elections.

Bond Street Theatre will introduce new styles of theatre to the Nangarhar Theatre Company and new methods of educational theatre for youth.  Most importantly, the program will initiate an all-women's component to the company.  The all-women's group will allow the company to perform in locations only open to women, such as women's shelters, safe houses, and the women's prison, bringing crucial information to women who have never before experienced live performance.

Similarly, the men's team will perform in locations where the presence of women on stage would be inappropriate, such as the Afghan military police and other all-male audiences.

To ensure sustainability, the Theatre for Social Development project creates partnerships between each theatre group and aid organizations in need of their services.  Over the past year,  BST has conducted this model project with White Star Company in Kabul and Simorgh Theatre in Herat.

Integral to the project, Bond Street Theatre is also creating a Training Manual that will give artists and aid organizations a wide range of theatre-based methods applicable to development programs.

The program is funded by the US Embassy in Afghanistan and the United States Institute for Peace, an organization dedicated to promoting the field of peacebuilding.  Bond Street Theatre, active in Afghanistan since 2003, stands out amidst the country's most committed cultural ambassadors.

Following September 11th, Bond Street Theatre members headed to the Afghan refugee areas in Pakistan to work with children affected by the conflicts.  There, they met Exile Theatre and began an 8-year relationship that led to their acclaimed production, Beyond the Mirror, depicting Afghan life in wartime as told through first-hand stories. The performance toured in Japan, Afghanistan and the USA (2005 and 2009).

"The first collaboration between an Afghan and an American theater company, it has a quiet authority, even delicacy, that is truly powerful," stated Margo Jefferson in The New York Times.


Bond Street Theatre's artistic-humanitarian relief work in Afghanistan since 2003 demonstrates a firm commitment to the Afghan people and their future.  Their work has included programs for women, men, children, and teachers in Afghan schools and orphanages, training for Kabul University students, and educational programs for over 10,000 children in remote villages in northern Afghanistan.  The current Theatre for Social Development project builds the capacity of local theatre organizations to continue this work.

For more information, or to schedule an interview in the US or Afghanistan, please contact Olivia Harris at 212-254-4614 or olivia@bondst.org.