What's in a name?

on the impossible necessity of naming what we do ...

On Saturday evening, I attended a showing at the end of a 4-day network meeting of Neuer Zirkus Deutschland. Eight short performances were presented - solo or duet, mostly work-in-progress - incorporating techniques from trapeze and aerial work to contortion, comedy and roue cyr. While some were primarily demonstrations of skill, most used circus techniques as a basis from which to explore artistic expression - hence the name "new circus". Stories of love, struggle and longing were told through both text and the physical actions of bodies and objects. I particularly liked Ruth Biller's simple relationship with a chair (pictured below left), and Jana Korb's poignant waiting for her dreamed-of second trapeze that never arrives (below right). 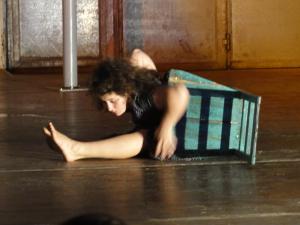 What makes this work "new" rather than traditional circus is its attention to dramaturgy and artistic expression. Traditional circus prioritises perfecting technique and athletic prowess to impress and entertain its audience, whereas new circus concentrates on artistic expression, borrowing from other performing arts forms to provoke a deeper response from its audience. Perhaps there are also now two branches within new circus - the commercial and spectacular large-scale high-budget companies on the one hand, and on the other the experimental and more interesting, to me, independent artists such as those in the NZD network. It's more interesting to me because it engages me in a way that the more commercial work doesn't, even when I enjoy the spectacle; it speaks directly to me. The venues where I've seen different forms of new circus also highlight the differences in their attitudes: I saw Cirque du Soliel at Munich's large Olympic Stadium, whereas Saturday's venue was at an undeveloped former military and industrial area that now houses artists' studios, a theatre company, alternative music venues and informal bars and meeting places. The ceiling could have been higher and the heating quieter, but otherwise the atmosphere was perfect - especially for the vertical dancer who climbed and crawled and balanced his way across the three-storey facade of one building.

In Germany, circus is classified as a trade rather than an art form, "show business" rather than cultural arts. One goal of Neuer Zirkus Deutschland is to change this by establishing new circus as an artform; after a struggle of several years, they have achieved a line on a form that specifically excludes "new circus" from "show business". Excluding it from other excluded practices is one step - the next is to get it INcluded with other artforms. 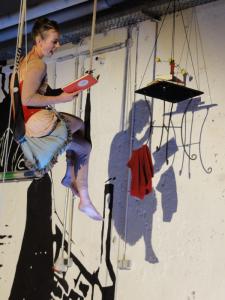 Having to define our practices in bureaucratic terms is tedious, and takes so much time away from our actual work, but if we wish to have recognition within existing systems it's a necessary evil. I've just been through a similar excercise where I have had to explain cyberformance to health insurance administrators, and it takes a long time, patience and paperwork. But in the long term, our small steps have big results, especially for those who come later and don't have to face the same hurdles. And it forces those of us engaged in experimental arts to interrogate and articulate what it is that we are actually doing, which in turn helps to develop our thinking and theorising around our work.

Whether it's cyberformance or circus or something else, there is plenty of healthy experimentation taking place on the margins of mainstream theatre practice. We are forging new forms and techniques, and at the same time we need to invent new names, new volabularies, to be able to talk about the work. These names are often inadequate, imprecise, open to debate, changed or thrown away after a short time ... but they allow us to discuss and communicate. In the end, it doesn't really matter what we call it, as long as we have enough words in common to be able to have that conversation. And Neuer Zirkus Deutschland are having that conversation.

This post Helen, conects with this info that I just recived