Summer started in Belgrade quite unexpectedly, already at the end of April. We moved from winter directly to tropical summer and while we at DAH Theatre are in the whirlwind of activities - performing, fundraising, teaching, touring - we wonder often where are we. The heat and humidity reminds me of Rio, or maybe Atlanta or Havana. During these hot weeks we have been often traveling to the nearby village of Bogovadja, where a Center for Migrants has been established. We are partners in the project “Beyond the Chapter: Accession to Diversity” with an organization from Belgrade GROUP 484 (leader of the project), that deals with different aspects of the migrant situation and their lives in Serbia. Our part is to work with children, both locals and children of migrants, with the aim to integrate the latter into the local community. Another group we work with is the group of adults, man and women.

During the last years, my theatre was not involved in projects dealing with migrant issues because we really wanted to understand how can we, theatre artists, be of use to people whose only goal, once they arrive in Serbia, is to move on to the so-called countries of Western Europe. They are in transition through Serbia, although this transition sometimes could last year or two, or even more, and sometimes they try illegaly to cross the border, facing danger and very often being returned back. This time we accepted an invitation to join the project.

As me and my colleagues from DAH Theatre, Ivana Milenović Popović and Nataša Novaković, and Marija Dakić from the GROUP 484 meet with the group of young men and women and talk with them, I understand that their entire existence is on hold, they are in a situation of constant waiting. The small, green village looks idyllic when one comes for the first time, but soon the feeling of huge isolation prevails. They cannot come to the nearby town, neither to Belgrade. I undersand that the only thing we can offer them is to experience the power of being in the moment, the power of being here and now and getting strength from that moment, instead being turned constantly towards an uncertain future. 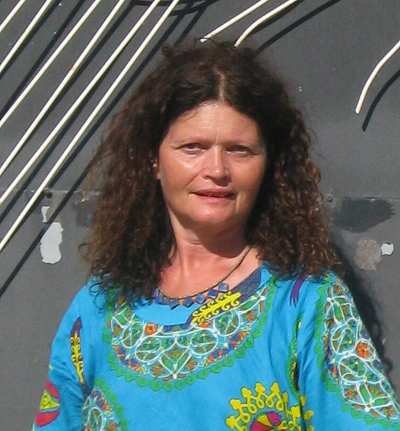 They feel at home with the heat and we move, we write, we cut words and create poetry, we make a map of the world in the space, we dance, we create haiku verses, images and short scenes. As usual, women are more interested and open to the work than men. I ask them to go to their “dream place” and do what they want there. Fatima from Iran goes somewhere to Germany on imaginary map on the floor and she does the action of swiming. She only wants to be free to swim in the swiming pool. Other women say that at their dream place they only want to be free to do what they want to do - something that many of us take for granted.

Today, after I finish this text, I am going there again. I am free to swim at this heat, to sit in a café, to perform, rehearse, to dress as I wish... And I will try to create that space of possibility with women in Bogovadja, who have become so close to me, and try to help them to awaken their place of power in themselves, to be able to endure on their way.

The project is supported by the EU Delegation in the Republic of Serbia.

Submitted by dijanamilosevic on 22 June 2018.
send mail to
the Magdalena Project