The voice of DaDa

After Prof. Russolo invited me to play in the “incomprehensible puzzling DaDa experience” he was producing under the title The Great Enchantment of Timelessness (Love), the first material I created was a video of myself playing around with two songs: S'i fosse foco arderei il mondo by Fabrizio De Andre' – because it's got the roughness of passion that I believed pertained to DaDa; and Dear dad by Helen Chadwick – because of its childish defiance in content and absurdistic blatancy of form, which I also saw as distinctly DaDa.
[[You can find here a low-quality, hilarious video of me singing Helen's song - don't judge me pls, I had a fever. It is also true that I often explore a Magdalena reference of some sort at the root of my performances and with Helen I had that covered, but I should probably write about that in another blog entry and stick to actual DaDa.]]

So I continue: … not that my initial views on roughness of passion//childish defiance//absurdistic blatancy being the mark of DaDa have changed since. The fact is that the director had decided that my character, Geisha girl Dadadu, would not sing; actually he then eventually resolved that she would not speak at all. Now one could have taken this to imply something about one's voice – but I remembered most to have claimed loving the sound of my voice on stage and, spurred by memories of kind spectators, I resorted to neutralizing the stage ingenue sitting sulkily at the bottom of my heart. She was wailing in outrage and considering treatment or devocalization after abandoning the show but I stuck it up and rode the waves of angst, to finally accept the silence of my character as having something to do with DaDa and not necessarily with me.
During the seven years since I moved to Amsterdam, I had crossed paths with almost all the other actors on the stage of Astarotheatro, but now for the first time we were coming together as a group (this was 2015). The structure of Russolo's musical compositions overarched the play and, through dramaturgy and players, the parade embodied onstage fragments of DaDa design, biography, literature – along with impressions of the //theory – caliber – import// of the cascading DaDa m'dada dada mhm.
Considering that the choice for non-verbality was not consistent throughout the piece, I was curious as to who in our DaDa experience was going to do the talking and who was to remain wordless.

[[Next was my Geisha girl, but more on her later.]]

The early video teaser for the performance was shot in April 2016, in the final stages of rehearsals, when my dad had just died and I flew to Italy to be with my family – if only for a few days since the premiere was approaching. I, Geisha girl Dadadu, am the missing body inside the dress tenderly held by MissQQ in the group shots. The Child of Absurb Passions had left her oriental flowery Blue to go and honour the Father. I wondered what the conundrum expressed by this sentence implied for the evolution of any art. Then luckily I climbed the ravine back and asked myself: where were women to be found in the land of DaDa dera dada and dada Tza? No/Some/Anywhere. 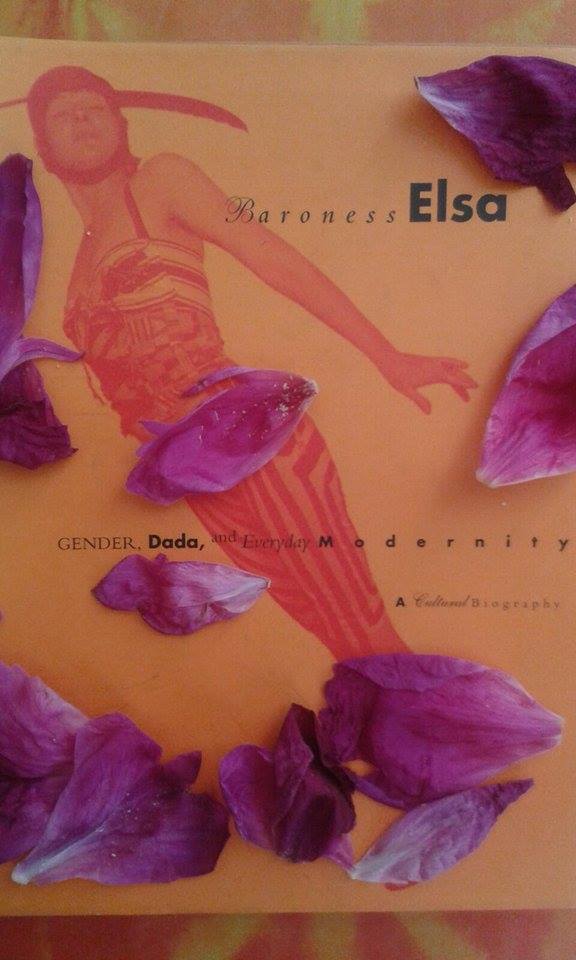 One woman I encountered in the recorded DaDa history blew fire and mud through my sense of artistic perception: Baroness Elsa von Freytag-Loringhoven led a tragically rococo existence and only some 90 years later were academics and critics interested in her fierce poetry of words and visual performances. The artistic elite of her times either marginalized or pillaged her work, but she is now said to be the undiscovered pioneer of performative Dada. Even Duchamp's famous readymades, popularly identified with all that is DaDa, were but the fallout of the Baroness' original kinesthetic DaDa Tza dada m'dada. BUT: on all material accounts his life was successful and history properly guards the name Duchamp in its strongbox, turning WORDnames from the personal to the common and the general. She died poor, enraged at the indifferent deserts she had crossed alone for years and, it goes without saying, without accomplishments. Reading the cultural biography of the Baroness written by Irene Gammel in 2002, cold-feeted at the carnage of female chronicles in art, I wobbled along to my own DaDa existence.
Unlike me a non-vegetarian, Geisha girl twirled the ribbon like gymnasts and made the director unwillingly accept that, if not words, then //blare – rustle – hiss – buzz – snap &twitter// her mouth certainly would utter, and that was that. There is more of her in the photos, the rest is in the performance.
Finally, I want to share with you a poem that I composed to echo the wisdom collected from this journey. I here present my spontaneous protoDaDa act, namely a *random* collection of word strings from the cut&paste operations which have resulted in this piece of writing: 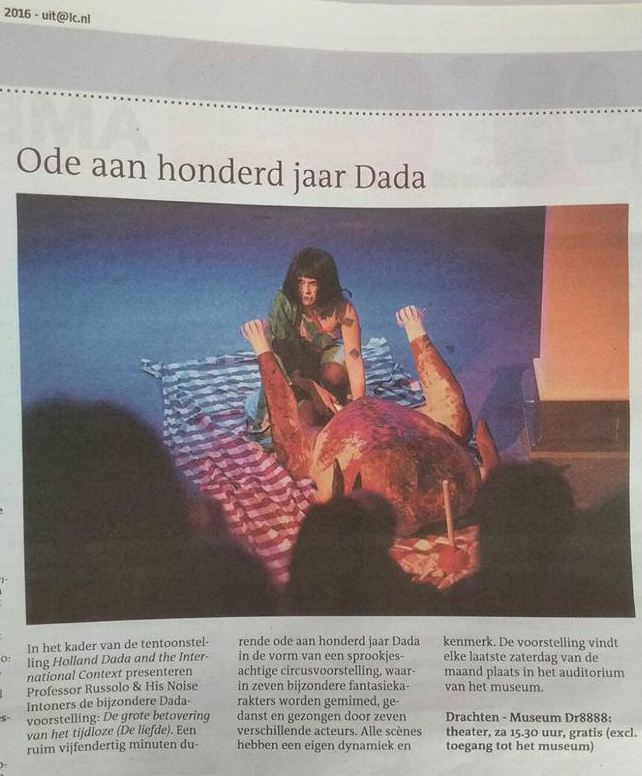 being a cat unfamiliar with words and,

/ Au, oi, uh
generate the most verbous scene of the enchantment

I was going to play a solo scene of some 8 minutes,
chained thoughts

And then I wondered, what is DaDa
to me

[[Like Duchamp I have “rejected retinal art”, but my conscience... she is sometimes deep asleep and all at once oh-so-vigilant... in comparison, the attention seeking behaviour of braggarts or untended babies and pets combined is like the nuisance telemarketing call you can simply mute – conscience instead is able to glare the triumphant beaming of the jehovah's witness in whose face you did not slam the door in time... she compels me to maintain that it would not be fitting to serve the mind for the purpose of art. Art Ethics aside, I am perhaps a servant of the WORD and yes, I did edit the poem above and banish bits and fringes of text.]]

My last two //DaDa dera dada - dada Hue// references for the Magdalenas come from sources I have ripped&glued throughout this story. We can agree that for age reasons I could not be a hippie (to the detriment of my potential, I dare say) let alone a DaDa-ie but, as the daughter of a generation that is yet another freakish offspring of postmodernism{whenwillitend}, I will close this paper with the proper post-structuralist statement of art and extrovertly cite the last two springs for this DaDa break:

{ 2 } the Manifeste Dada written by Hugo Ball in 1916
Hugo Ball, 'Eröffnungs-Manifest, 1. Dada-Abend', read at the first Dada-soirée, Zunfthaus zur Waag, Zürich, 14. Juli 1916
– in it, he addresses “poets, esteemed sirs, manufacturers, and evangelists”.
One remark I have is that, for a “tendency in art” that was going to stop “writing around the actual point” and bequeath to earth “the word itself”, they did not waste much time contemplating the gender scope of their vocabulary choices. Granted, the times for the gentrification of gender deliverance were then not as ripe as today. But now at the end of my framed ramblings, I know most performance purists or otherwise inclined lookers-on will have left the page – so I can just say it: to me the tone of this manifesto kind of evokes the overspeed prattle of PC bros in South Park... and PC stands for politically correct, bro!

goodbye //sibyls in verse, esteemed ladies, female workers in all factories, and the grand unified theorists of every gender// all your dreams will come true // take care to //

BE ANTI-AESTHETIC>
BE LOUD>
DON'T PLEASE>

BE BORED>
AND BORING>