Tantidhatri 2016: a magical bubble of joy

Every Magdalena festival has its own unique character, determined by the people organising it and its location. The Tantidhatri festival, held first in 2012 in Pondicherry and Auroville, and this year in Bengaluru, is no exception; it floats in a magical bubble of scents, colours and joy that is gently cradled by each of the many smiling volunteers. From 17 to 21 Frebruary, we were hosted at the beautiful Ranga Shankara Theatre, founded and run by Arundhati Nag who made it clear from the beginning that it was a privilege for her to be able to give the festival a home; she and her team at the theatre made us feel immediately welcome and at home there. Workshops and presentations were held at the nearby Shoonya Centre and Kappanna Angala. All the spaces were gracefully decorated with flowers and leaves, and every day before we began an oil lamp was lit in the space and kept burning until we were finished - one of many quiet rituals that infused the festival with a special light and focus. 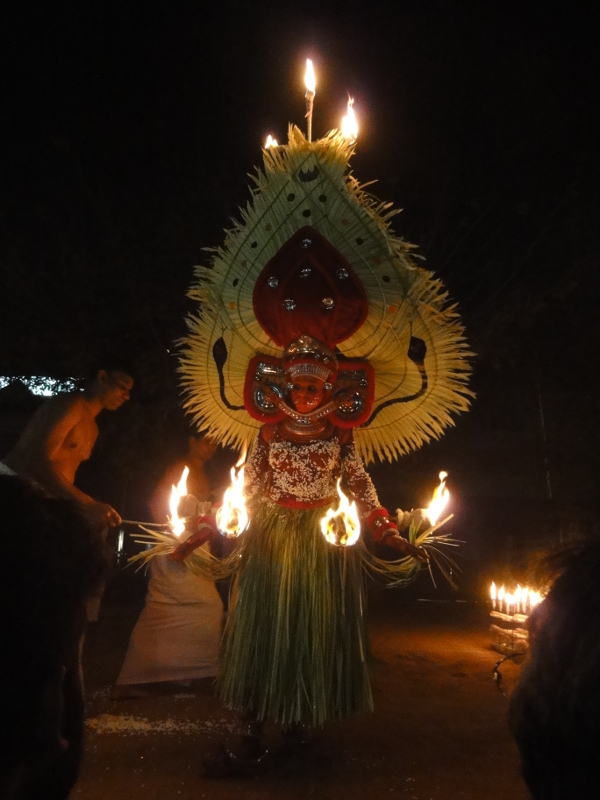 The 5-day programme offered a combination of tradtional and contemporary performances. The tone was set from the start with the opening night demonstrating the breadth of contemporary Indian performance practice: Dimple B. Shah's performance installation invited the audience to collaborate in creating a mandala which she then transformed (reminiscent but completely different to the performance that had opened the first Tantidhatri festival); this was followed by Rudrayogini - combining the traditions of Baul, Rudraveena (instrument) and Charyageethi (Buddhist poetry); and finally a ritual Theyyam performance - performed by men but celebrating female heroes (pictured at left). During the following days, we experienced a variety of other Indian artists such as Dhrupad singer Pelva Naik, and the actress Revathy addressing the taboo topic of homosexuality, alongside international performances. With Geddy Aniksdal we travelled to ancient China; Sandra Pasini performed orignal and traditional Italian songs; Gilla Cremer took us to on a harrowing trip to the seaside; Tina Milo explored the emotions of modern women; Julia Varley performed "Ave Maria"; and Korean performance artist Sin Cha Hong posed, through movement, the question "who am I?". The festival culminated in "Kaal", a performance that brought together international and Indian artists, and combined three different traditions to create a unique contemporary performance. Through Parvathy Baul's music, Anandavalli's dance (Bharathanatyam) and Narelle Benjamin's dance (based on yoga) the performance explored concepts of time and change. 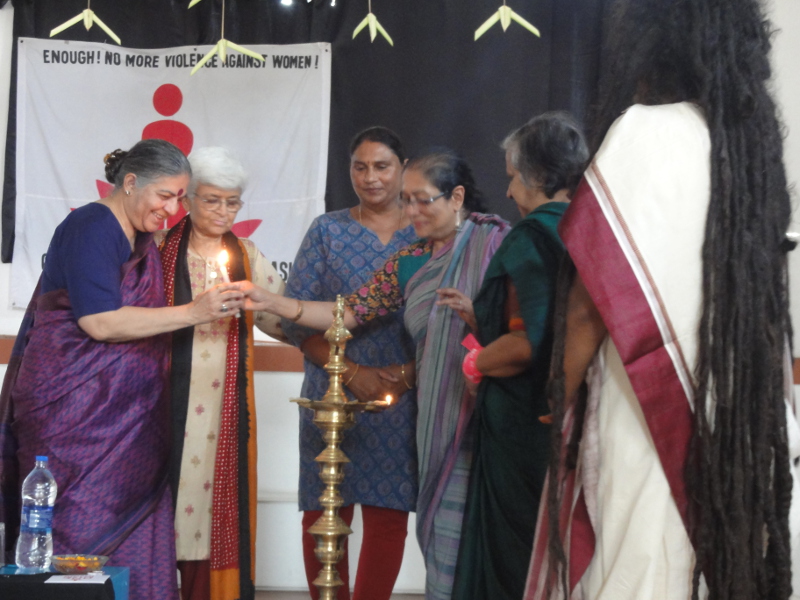 A highpoint of the festival for me was a day of presentations entitled "Interactions with Social Change", with four feminist activists. Kamla Bhasin is currently the South Asia coordinator of One Billion Rising, and showed footage from the campaign's global dance action on Valentine's Day. Nobel Peace Prize nominee Khushi Kabir is involved in projects that empower rural working-class communities in Bangladesh. Vandana Shiva is an environmental and anti-globalisation activist and author who advocates for the integration of traditional wisdom in contemporary practices. Transgender activist A. Revathi works on and writes about sexual minorities' human rights issues. They all spoke candidly about their lives, both personal and political, giving us insight into their work over many decades and numerous issues. Kamla and Revathi both spoke about using performance and the arts in their work - theatre, songs, dance and street theatre (and Kamla reminded me very much of my grandmother, with her slogans and her strong, positive approach). Vandana talked about the terrible impact of Monsanto's genetically modified seeds on Indian farming communities (some statistics I noted down: the price of cotton seed jumped by %80,000 when Monsanto entered the market; Monsanto has collected $90 million in royalties from Indian peasant farmers; and 300,000 farmers have committed suicide as a result of being in impossible debt to Monsanto). She also mentioned New Zealander Marilyn Waring's book "If Women Counted" as an influential text for her.

My own presentation was in the "Experiencing the process" part of the programme, along with work demonstrations by Julia Varley and Carolina Pizarro, and folk singer Shabnam Virmani. I spoke about the process of We have a situation!, specifically about the "situation" at the Multicidade Festival last year in Rio de Janeiro on the topic of water pollution. I was the last speaker on the last afternoon of the festival, in a hot room, so I was impressed that people stayed to listen and remained engaged despite the heat. I had been very inspired by the "Interactions with Social Change" presentations the day before, as much (all?) of it resonated with my ideas underpinning We have a situation! I was also making connections with the reading I'd been doing in the previous few months around ideas of post-democracy and proto-political engagement as I was writing a chapter about We have a sitiuation! for a forthcoming book on the arts and global civic engagement. I had based my presentation on this chapter, then wove in themes from the talks the day before as I was delivering it. Gabriella, Elaine and Mem were able to join the presentation online and provided some humorous antics and work demonstration elements in UpStage. 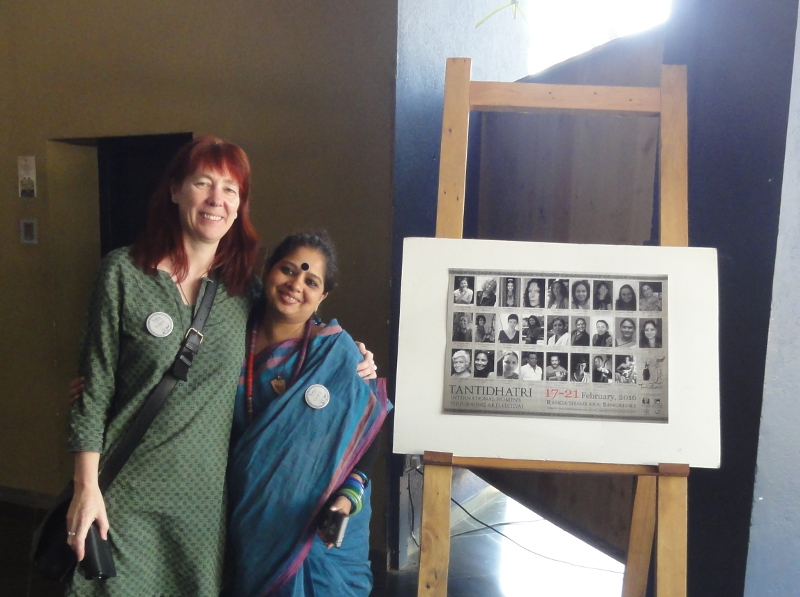 Right: with performance artist Dimple B. Shah, who was also at our Magdalena weekend in Munich last year. We are standing next to a poster featuring all of the festival artists.

Late on the final evening as we made our traditional closing round, we interrupted ourselves several times to farewell departing artists. My own flight was not until 7am the following morning, however allowing for the drive to the airport which could take up to two hours, and time for check-in and security, my taxi was booked for 3.15am ... and as we didn't get back to the hotel until around 1am that left just enough time for me to pack and farewell my sleepy room-mate Carolina. As I waited for the taxi, I heard footsteps hurrying down the stairs and Tomomi, one of the dedicated volunteers, appeared to speak to the taxi driver and give me a last farewell. I set off into the night, feeling once more inspired and enriched by another encounter with the world of Magdalena.