Sometimes it’s only when you release it, that you realise you’ve been holding your breath.

Awoke today, still ebullient from yesterday’s inauguration, satiated by the finely wrought spectacle of American propaganda. In our American- British- European household here in London, this was a long-awaited salve. As yesterday’s pomp and ceremony unspooled, so too did an imaginary roadmap, linking family and friends, the people and places I’d visit again in the USA, once travel became possible. That was yesterday’s holiday scenario; today I’m back at work. It’s the same physical location of course, just different mindset.

Perched on my desk is the 365-day flip calendar of positive quotations for 2021, a Christmas present from my sister. My sister calibrates herself each day to the most positive setting she can muster, staunchly going about her busyness with an abiding belief that things will improve if only she makes an effort. We are not so very different; I’m attuned to seek out the words, images and deeds that will transform my P.O.V. Yesterday it was Amanda Gorman’s admonition that settled in my heart: ‘We've learned.. ..that  what just is isn't always justice.’ Today’s upward beat is still to be revealed. 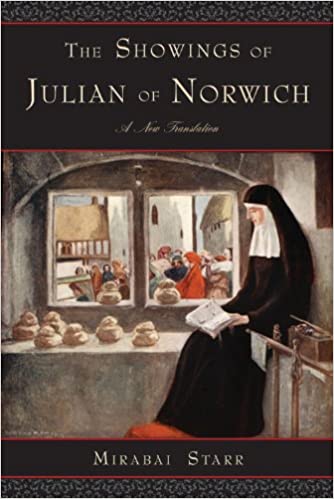 Flipping the page, I see we've reached the 21st day of 2021. I say the numbers aloud but without conviction. Belief is a necessary component of transformation. The page has a graphic illustration of unseasonal tulips, together with a quotation from Julian of Norwich. I was born and bred in Norwich and am well-schooled in Julian. She was a Christian mystic who lived in Norwich from 1342-1416 and is best known for her ‘Revelations of Divine Love’, the first book in English known to have been written by a woman.  I prefer the performative flair of Julian''s original title, ‘Showings.’  Shortly after her visions, Julian became an anchoress, withdrawing from the secular world for a life of prayer in self-isolation. This involved a ritualised entombment for 60 years, within a small sealed room adjacent to a church; two small windows, one opening onto the church services, the other to the outside world. It is through the latter that she was cared for by her servants, Alice & Sarah, of whom we know nothing. Since there is little biographical knowledge of Julian, scholars constructed much of her life story from clues gleaned from a general knowledge of medieval life. Of it's own volition, my mind begins spinning yarns about how Alice couldn’t abide the damp odours of Julian’s cell, leaving Sarah, who had lost her sense of smell in a farming accident perhaps, to hang out with Julian. It would be left to Sarah, appearing in a tiny window of her cell, to catch Julian up on the real-time dramas of the city: the Black Death, the Peasant's Revolt.

What, I hear you ask, what does the 365-day flip calendar of positive quotations convey from Julian, the 14th century mystic of Norwich, to the Magdalenas, on this the 21st day in the 21st year of the 21st century? I’m glad you asked, it is thus:

Usually susceptible to repetition, the ‘well’ begins to stick in my craw, like a morsel of unbuttered toast.

Moving on. Laptop. Emails: I learn I’m cancelled as dinner party extra in a Netflix film, a sweet deal involving good remuneration for 2 tests followed by 7 days of self -isolation prior to a 1-day shoot. Ironic that after months of shielding in place, I might be paid to stay in seclusion in my bedroom. A second email from another agency offers me a one- day modelling shoot for a medical company, providing I can ride a bike. I can ride, I do ride, I am riding - daily along the Thames path from Deptford to Greenwich yacht club, dodging the runners, the pedestrians three abreast on narrow passageways, trailing dogs, children, strollers. We are all heavily masked out o’ doors, having discovered that in addition to the protective layer, a mask keeps you warm. Before the cancellation for this shoot arrives, I imagine being legally conveyed to a stretch of country road, somewhere beyond the borders of London, a verdant place where I can demonstrate my prowess, cycling up hills and down dales.

Lapsing into fantasy is a reliable comfort during lockdown, symptomatic of an inability to sustain focus.

Having now used up my allotted procrastination time on Julian and emails, I set to work. I have a commission to make a short video for Winning Moves, an Arts Council Lottery project.  The video is due soon and I am only one third of the way through completion. This project concerns the methods which people have found to cope with serious neurological diseases. My contribution hopes to capture the way my father, an ordinary man, chose to make light of an uncommon neurological predicament. ‘Making Light’ for Dad was a turning towards humour, a daily attempt at light-hearted banter. When his illness had robbed him of speech, he used his little blackboard to scratch out a smattering of repartee.

For no particular reason, I begin work by imagining him as a damselfly, skimming across an unfamiliar stretch of water, hovering weakly above the surface, yet still managing to stay beyond the reach of the murky and treacherous waters below. The image is swiftly moved to my mental trash bin. While trying to write a scene that would make my Dad laugh I had mislaid my sense of humour. Tactically, I stopped thinking about him and his illness, to write characters in situations that made me laugh. Laughter is both movement and sound.  Erupting from the inside of the body, laughter occurs on the exhalation.

My Dad, like many of the men in my family, would often laugh ‘til he cried. Yale psychologist, Dr. Oriana R. Aragon, calls this ‘dimorphous expressions’ or the body’s way of regulating strong emotion. Reading on, I learned that crying and laughing occur in the same area of the brain, the Pseudobulbar. Well, well, well. My Dad’s particular type of motor neurone disease was Progressive bulbar palsy. Yes, the same bulbar. I hypothesize that the part of his brain that killed him was also the wellspring of his tears and laughter.

I finished writing the alleged comic scene for the Arts Council project at the weekend, then tested it on friends who kindly read emails and listened to me enacting all parts, including stage directions. It made them laugh. It did. Enough to make me believe that the scene would have made Dad laugh too. Maybe, one day, it will make you laugh.

Almost noon, my scene partner is due on zoom. This is Bill, a 77-year-old retired engineer turned actor. Bill is endlessly patient and thankfully, flexible. In the few moments it takes to set up zoom, I am blind-sided by a wave of worry, a regular occurence these days,  felt surely by everyone in the UK, now that we’ve reached the highest national death toll. A sudden slip into my own murk dredges up concerns about my daughter and her boyfriend, both weakened and anxious after becoming ill at Christmas. My daughter is an obstetrician, planning to return to work next week following a month in bed. She wonders if she is strong enough to pull out babies when currently, even walking to the corner store feels like a 5k run. Yesterday, in addition to all the attendant other ailments, her eyes were unaccountably swollen. I am banking on Occupational Health Services at the NHS to send her back home, or that her colleagues will tell her to stay away a little longer. But maybe everyone is weakened and anxious in hospitals now. Maybe everyone’s eyes are swollen. 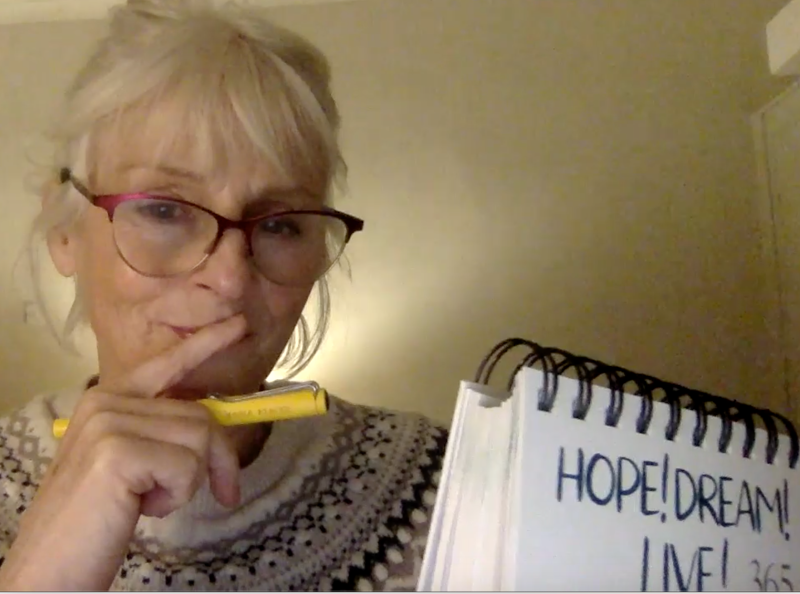 Outside, thin wintry sunshine illuminates a pair of crows, huddled together on the bare branch of a sycamore tree.  Freeze frame.

Bill suddenly arrives in an adjacent zoom window. “Hello Missus” he yells. I wonder if the maid, Sarah, would pop up like that, grinning broadly through the little aperture in Julian’s cell. Bill’s arrival heralds the start of a new scene and a new train of thought, but first, I must make a confession. I tell him I’ve messed up continuity in the last shoot and must redo the dialogue. Bill’s smile pulls his face this way and that, ‘never mind’ he reassures me, ‘all will be well.

A nanosecond in which to bend my mind to the business of laughing, crying, living.

Submitted by Karla Ptacek on 21 January 2021.
send mail to
the Magdalena Project