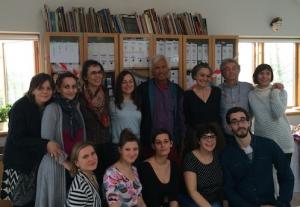 In February 2015 the Royal Library in Copenhagen (the Black Diamond) will receive part of the original documents from the archives about the first fifty years of Odin Teatret's life.

Odin Teatret continues its activity: all the documents that are needed by a living theatre will remain in the theatre (including press reviews, organisational and administrative documents) while the Royal Library will preserve the documents for future generations, using state-of-the-art technology.

The documents collected by the Odin Teatret Archives about all aspects of the life, relationships and culture of this theatre can be stored on new media, disseminated in Denmark and among all the primary world cultural institutions collaborating with the Royal Library.

The NTL- Nordisk Teaterlaboratorium will keep a digital copy of all the documents deposited at the Royal Library in the Odin Teatret's archives. As it has been since the foundation of the OTA-Odin Teatret Archives in 2008, the theatre archives are open all year round for visiting students, scholars and researchers (www.odinteatretarchives.com).

The historical archives of Odin Teatret, including the private archives of Eugenio Barba and some of the actors, will be available for consultation at the Royal Library (www.kb.dk/da/index.html), and  in digital format at NTL-Nordisk Teaterlaboratorium in Holstebro.

The documents about the first fifty years of Odin Teatret have been arranged, digitised and, with the help of the protagonists' memory, information has been collected about the events that produced them. They reveal a complex network of relationships and show concretely how theatre can be used as an access key to the study of human behaviour.

This important historical investigation keeps not only the documents but also the memory of the theatre alive.

The work started in 2008 and was conducted by an international group coordinated by Mirella Schino (Roma Tre University), assisted by Francesca Romana Rietti and Valentina Tibaldi.