PANTHEATRE NEW YORK (PANNYC) is an annual training intensive, directed by Enrique Pardo and Linda Wise and produced by the Nettles Artists Collective since 2009.  The aim of this workshop is to convey PANTHEATRE‘s performance research and training methods which is one of today’s most culturally mature and innovative performance laboratories in the world.  PanNYC is aimed for artists and teachers from all the performing fields such as theater, voice, dance, and circus as well as scholars, therapists or anyone interested in cultural and critical studies linked the  to mythology and archetypal psychology.

Renowned Paris-based Pantheatre will be offering its yearly training by artistic directors Enrique Pardo and Linda Wise in NYC. Produced by Nettles Artists Collective, this year PanNYC will include two weekend intensives on Voice Performance and Choreographic Theatre, as well as  two concurrent weeklong programs: Interpretation by Linda Wise and Possession by Enrique Pardo. 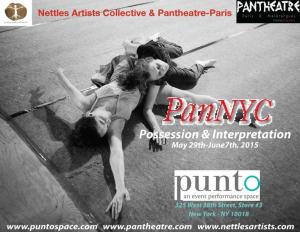 ABOUT: Founded in 1981, Pantheatre was the first independent company to emerge from the Roy Hart Theatre (1969-1989). Its directors are founding members of the Roy Hart International Artistic Centre.  It was founded by Enrique Pardo with a solo performance on the God Pan, following several years of voice and movement research with a circle of actors from the original Roy Hart Theatre Company – amongst them, Liza Mayer, Linda Wise, Vicente Fuentes, Saule Ryan, Kevin Crawford, Diana Palmer, Noah Pikes and Kozana Lucca.

For any inquiries please contact Debora Balardini via email: pannycworkshop@gmail.com

With the directors of Pantheatre, France

The Art of Interpretation

“Singing a song is a performance challenge in which you have three to five minutes to tell a story, constellate an idea and convey an emotion. It is an expression unremitting in its structure – you search to discover your own unique musicality with both its accuracy and feeling, whilst giving the information of the text. You also have to enhance and resolve the poetic and psychological tension between music and words.” Linda Wise. See more (including on the choice of songs) on :  HYPERLINK "http://www.pantheatre.com/pdf/2-songs.pdf" http://www.pantheatre.com/pdf/2-songs.pdf

Please contact Linda if you have difficulty in choosing your material

Please bring 3 copies of the score to the workshop.

The art of possession –

Post-modernism seems to have stalled in self-possession.

Deconstruction rarely flies off the rational handle – even when poetic or ironic.

Now we have Peter Kingsley’s shamanic stunning proposals (check him up!)

We must call on voices that venture beyond self-composure and self-expression.

The art of flying off the rational or self-centered handle, with voice, music and (e)motion.

The art of taking the lid off the meanings and enactments of texts.

Choreography : here, fundamentally a question of “realizing” where you are, of finding your place, and therefore: the plot you are in.

Movement: to “make a move” is above all a quality of initiative, of making the appropriate gesture: be it loving or mad – or preferably both.

Dance: how to include “the dance of ideas” – especially in relation to texts and emotions.

Dis-association: the motto of a Spanish garrison in Granada read: “School of Genius : Doctrine and Dressage”. Poietics and the method in the madness.