I’d like to share a few thoughts following my participation in Mestiza Chile Festival 2018, organised around “Memory and Resistance”, an important theme in this tumultuous time, just after the Brazilian elections, and the rise of the extreme-right elsewhere including in Australia.

The curatorial choice was great and inclusive of many forms (live art performances, installations, new circus, dance, butoh, as well as theatre). It's something I value because I have stumbled for a while over the subtitle of Magdalena: an international network of women in contemporary "theatre". Why the word "theatre"? Why not opening up to "performance"?

With today’s shifts in many levels including ways we communicate and our use of technology, I feel it is important to see how we are re-thinking how to reach the public and also occupy the performance space with new formats or/and different propositions, highlighting the visibility of women’s issues.
For instance, last year, Julia Varley and Ana Woolf presented a poetic parade with short vignettes throughout the city of Pinamar (Argentina), to close the Magdalena Segunda Generacion Festival; and last month, during Mestiza, several performances happened in busy places at peak hours, such as "Muertas" initiated by Maritza Farías Cerpa, in Santiago at the entrance of a metro station and in Valparaiso at the Plaza Sotomayor, around the patriarchal symbol of the "Monumento a Los Heroes", with women standing still –  then lying like dead bodies – each holding a card with facts about a feminicide that happened in Chile. 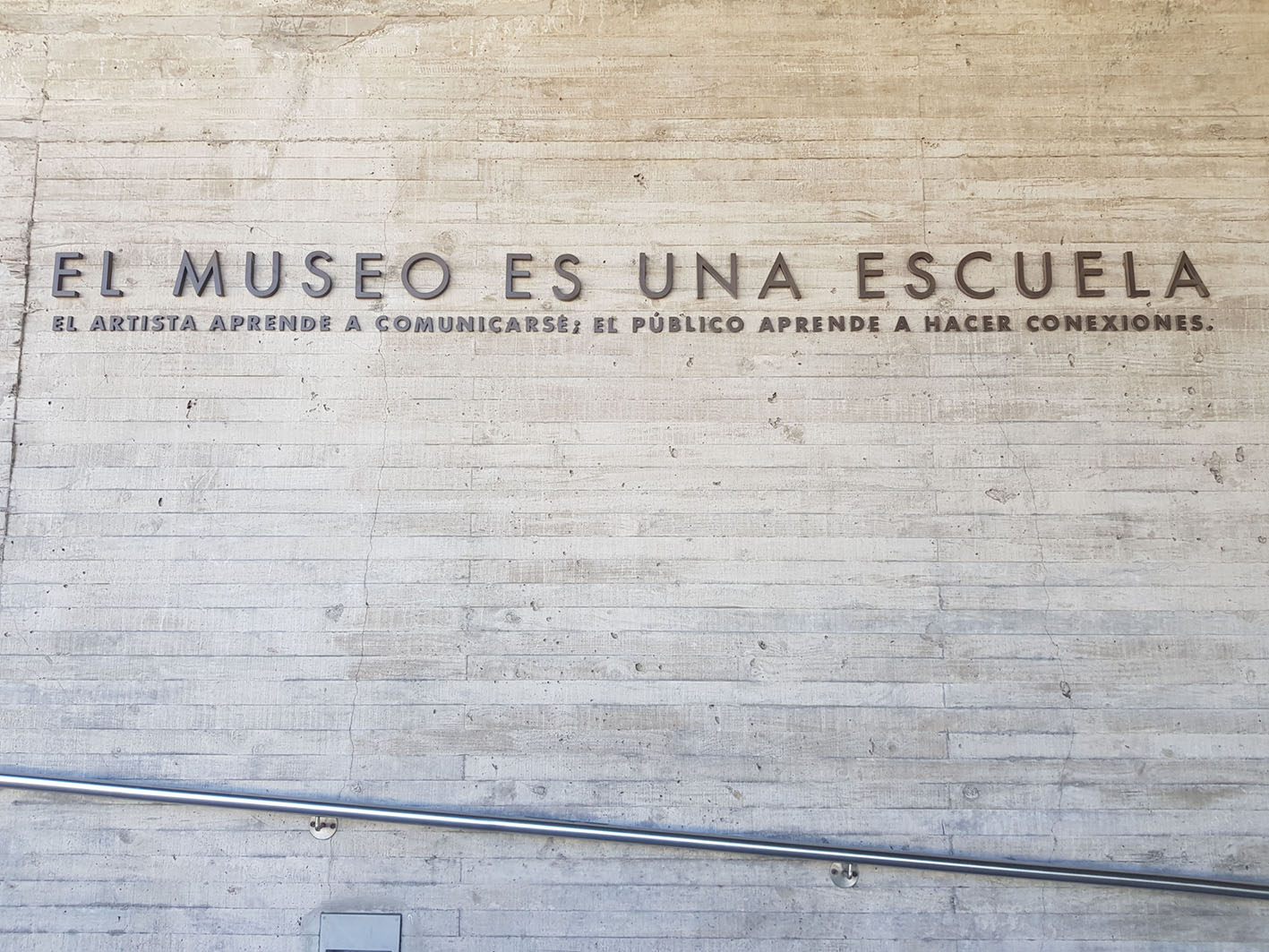 The theme of this year Mestiza Chile Festival represents for me a deep challenge in what we do as artists, and how we do it in contemporary life. How do we resist? How can we support each other?
Personally, I revisited some of Chile’s history by going several times to one of the three main venues of the festival in Santiago, the Museum of Memory and Human Rights. https://ww3.museodelamemoria.cl 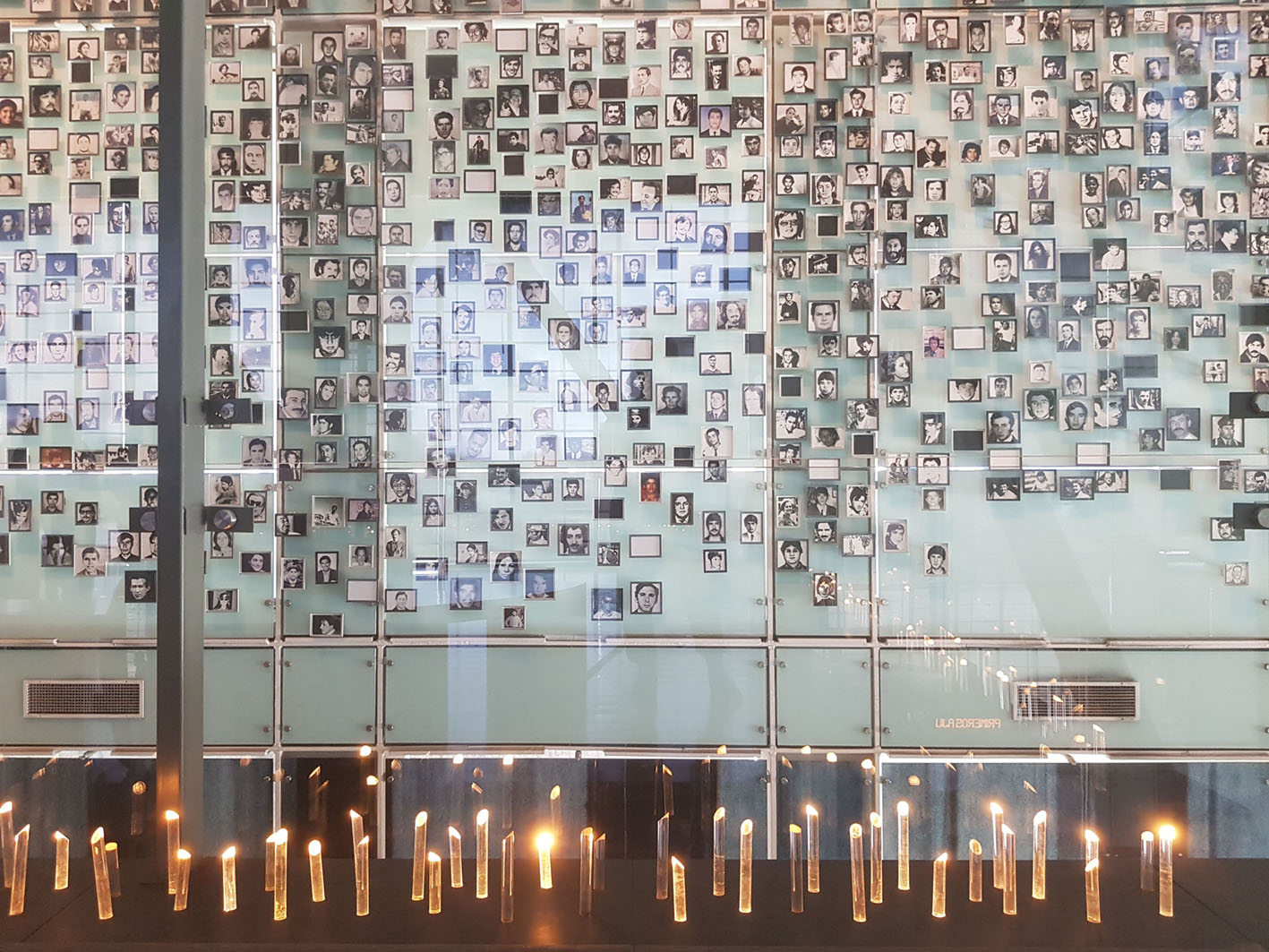 An impressive architecture, engulfing the public right from its entrance, in the human rights declaration written all over its outside walls and taking people on an inner journey, through the horrific dictatorship between 1973 and 1990. The mission of this museum is “to allow dignity for victims and their families, stimulate reflection and debate and to promote respect and tolerance in order that these events never happen again.”
The museum brought me right back to my own history and stories of WW2 Holocaust, transmitted by my parents who survived as “hidden children”, and that I am still digesting in order to translate them into arts - yet wondering how can we learn from the past and transform our future.

The second part of the festival was held in Valparaíso, at the Parque Cultural, an architectural complex including a former prison, which was in use until 1999. The old cell block was transformed in 2000 and is now used for cultural purposes and multidisciplinary workshops. The new life of the building kept some traces from its past, the lockers, some of the walls, and some panels on both side entrances commemorating people who were also incarcerated during the dictatorship.

I enjoyed the Valparaíso episode, as the schedule was lighter and gave us time to walk in the colourful city with hundreds of graffitied frescos, strengthening some friendships and making new ones.
This is where I had the great opportunities of following the clown workshop with Maite Guevara, discovering the buried “wild mad little girl who wants to play,” and of dusting off and challenging my very being in the actor workshop by Geddy Aniksdal. On one hand, tasting their teaching gave me a more subtle understanding of their works and a new facet to my unending personal development.

Other Forms, Skills, and Training
In the intro, I talk about “other forms” than “theatre”. Other forms mean also a range of skills and training, which were offered by Mestiza Chile throughout the Santiago week too. I am always interested in watching performances where skills give performers special qualities, often lying in their body awareness and strong presence. Images that stayed with me are:
- the two brief and magic site-specific interventions “Pascualas” by Andrea Lagos, dancing with and moving through water in the fountain of a park, and through reeds of a small wetland in a corner of the Museum of Memory; a fury at times and part of the landscape at others; both outdoor performances had a different dog impromptu participation
- the strong Butoh piece “Blow, a Broken Woman” with Natalia Cuéllar playing with the distortion of her shadow on the wall and slices of light like geological layers that the body was traversing 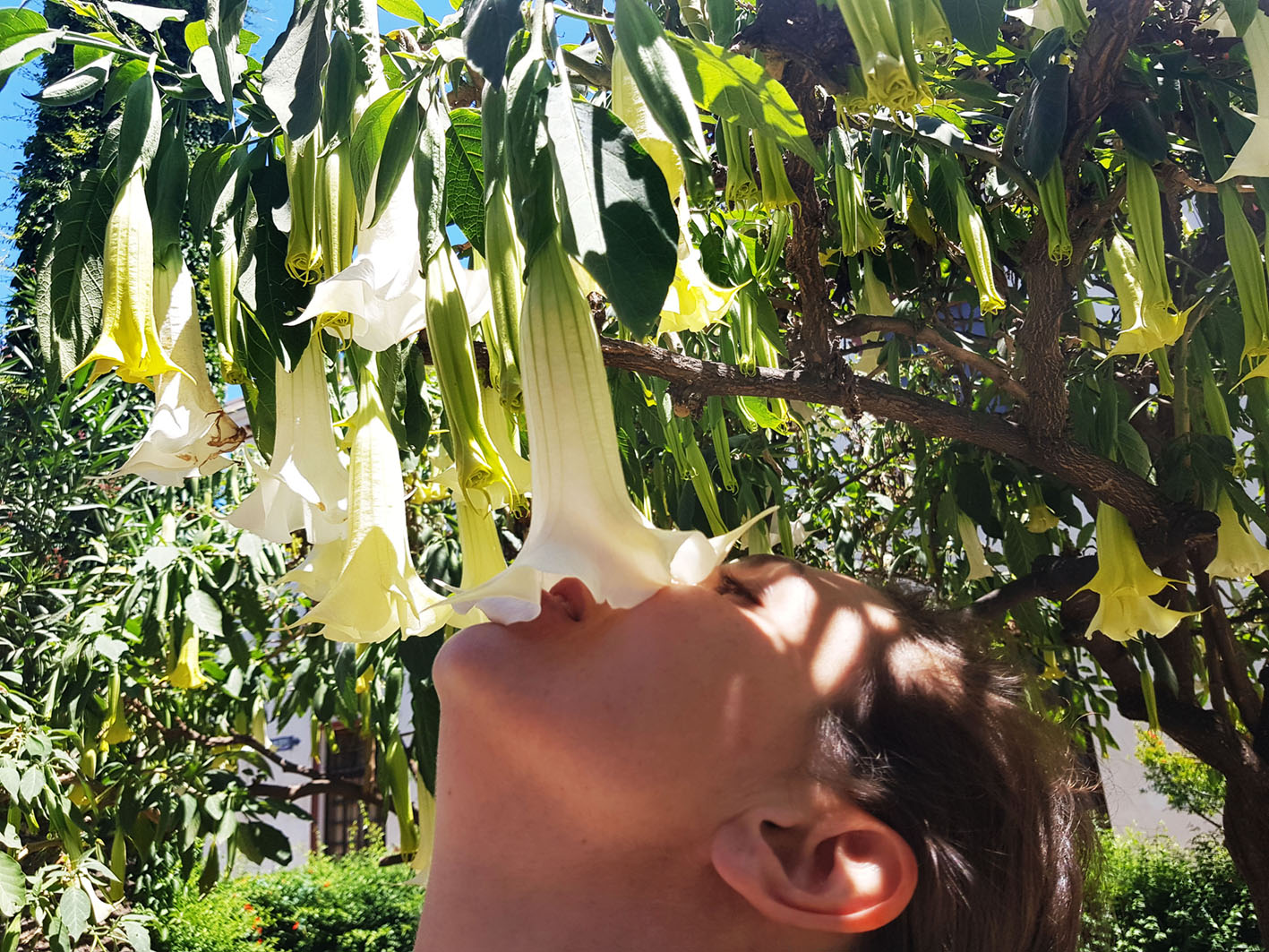 - the delicate and poetic performance lecture “The Boba Girl” by Barbara Biscaro singing, dancing with objects, sounds, and poems in a space which had a nice minimalist aesthetic
- the powerful lecture “Investigate and Excavate the Politicity of our Affects” by Ileana Dieguez denouncing the disappearances of people in Mexico and how people deal with the issue (I did not know the situation in Mexico was that bad, due to political reasons for one third of the disappearances, to women trafficking for the second third and to drug trafficking for the last third)
-  the gutsy interpretation of the new circus performance "Instinct" by ByK Circus with Belen Celedon & Kikko de Maglie, directed by Veronica Moraga, leaving impressions of a woman struggling with herself, dispossessed of her body with literally her coat hanging in the air, a dysfunctional couple balancing on a ladder,...
Same but different

Seeing some performances several times, in different venues, in various festivals, at different periods, does not only mean supporting my fellow artists but also gives me a deeper appreciation of the performers’ and directors’ skills, how they layer their characters, how they react to different energies, and how they adjust to a space. I am thinking of Geddy Aniksdal in the “7 Songs of the Refugee” directed by Tor Arne Ursin. Geddy makes us travel through time with use of her martial art skills and some tiny details of how she prehends objects as a soldier or an aged man; and how Maite Guevara responds and reacts to her audience’s laughs, giving moments of joyful surprises, checking boldly, for example, an amplifying microphone upstage, as a possible surveillance device! I also like to watch details of lighting, costumes, props,...
Furthermore, I enjoyed to see "Personnel Geography" by Mercedes Hernandez twice, drinking tequila and receiving my totem, and in Valparaiso, I could see much better the floor and discovered the patterns Mercedes was made with dried corn looking like small white stones.
I witnessed an iteration of “Daughter” by Jill Greenhalgh, after performing in one of them at the Transit Festival. This time I experienced the work from the outside, with the richness of each performer bringing their specific story and culture to their table. A walk through a dimmed atmosphere with a huge scope of emotions, especially when sitting with one of the performers telling the story of a particular object, journeying between tears, smiles, and gaze.
Mestiza Chile image gallery

Residency at the Domo Teatro
The Domo Teatro is a special space, at the foot of the Andes, in the middle of an eco-community, a village inhabited by people interested in sustainable architecture and other lifestyles closer to nature. The Domo is used for daily yoga classes and making performance. Véronica Moraga and Antonieta Muñoz made it with love and manage it. They generously offered Amaranta Osorio and I  a two-week residency before the festival, to continue the creative development on WHAT I DID NOT SAY, following a one-week residency at Artephile Theatre in Avignon.
Less than a year ago, Amaranta was invited to participate in a feminist conference in Madrid. Following the audience’s response, she decided to put most of her stories into a play. She wrote the script, which recently got the mention of the jury for the Dolores de Castro Award, an important award in Mexico. She formed the team which consists of: Alicia Blass her former teacher and scenographer in Madrid, Mohn a composer/sound engineer and designer we met in Avignon, James Cunningham movement consultant, and myself as outside eye and video-scenographer. 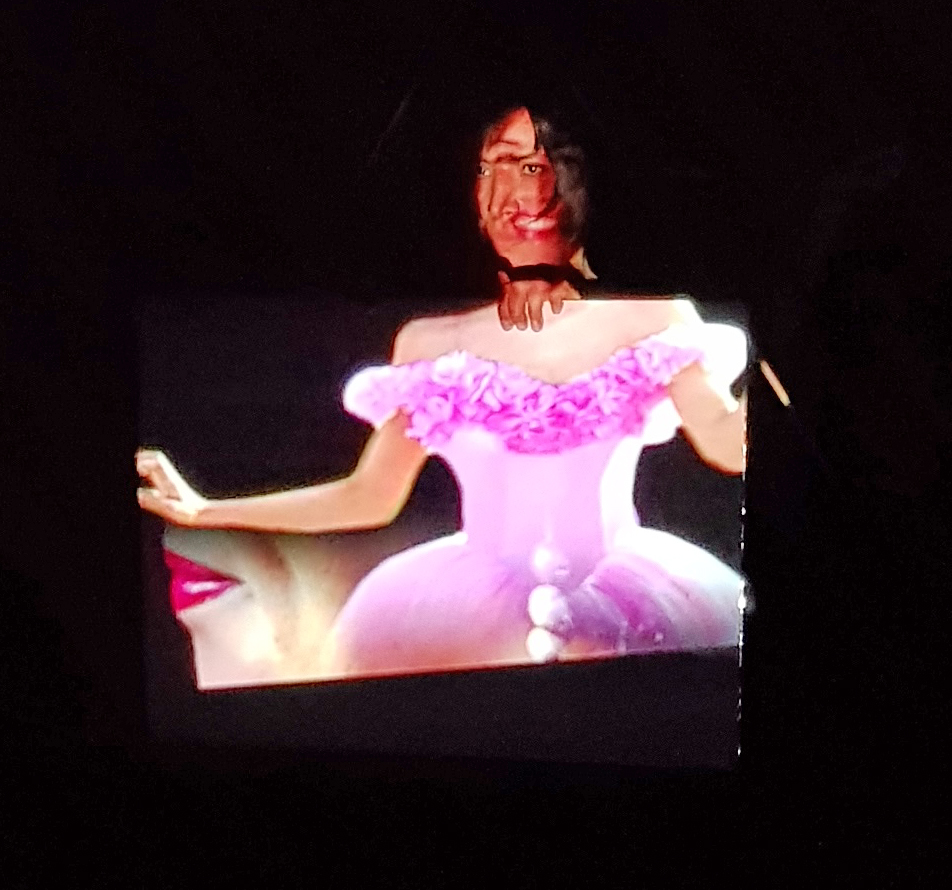 The first week in the Domo was challenging, Amaranta and I had to find a way of working just the two of us. As an external eye, I liked the decomposing movement and finding how to manipulate objects by “doing it backwards”. To make video projections for me, means to discover and understand the content of the performance, to find how the space can transform and evolve during the performance and how it can mesh with the performers’ actions, the dramaturgy, the soundtrack, and the light. So, each time the process is different and responds to the synergy of the work. I definitely don’t come with a preconceived idea. Sometimes, it takes a while to understand what will be the aesthetic of the projections, how they will interact with the set and props, and what will be the video content too.
So, I spent most of my time in the Domo, shaping the performance with Amaranta and editing the soundtrack (which is important in this case). The last four days, I edited the video and mapped it to the props and costume, so we could rehearse with all elements, and eventually presented it as a work-in-progress showing in the festival.
This chapter has been possible with the precious personal support of Vero and Anton, that I thank from the bottom of my heart. 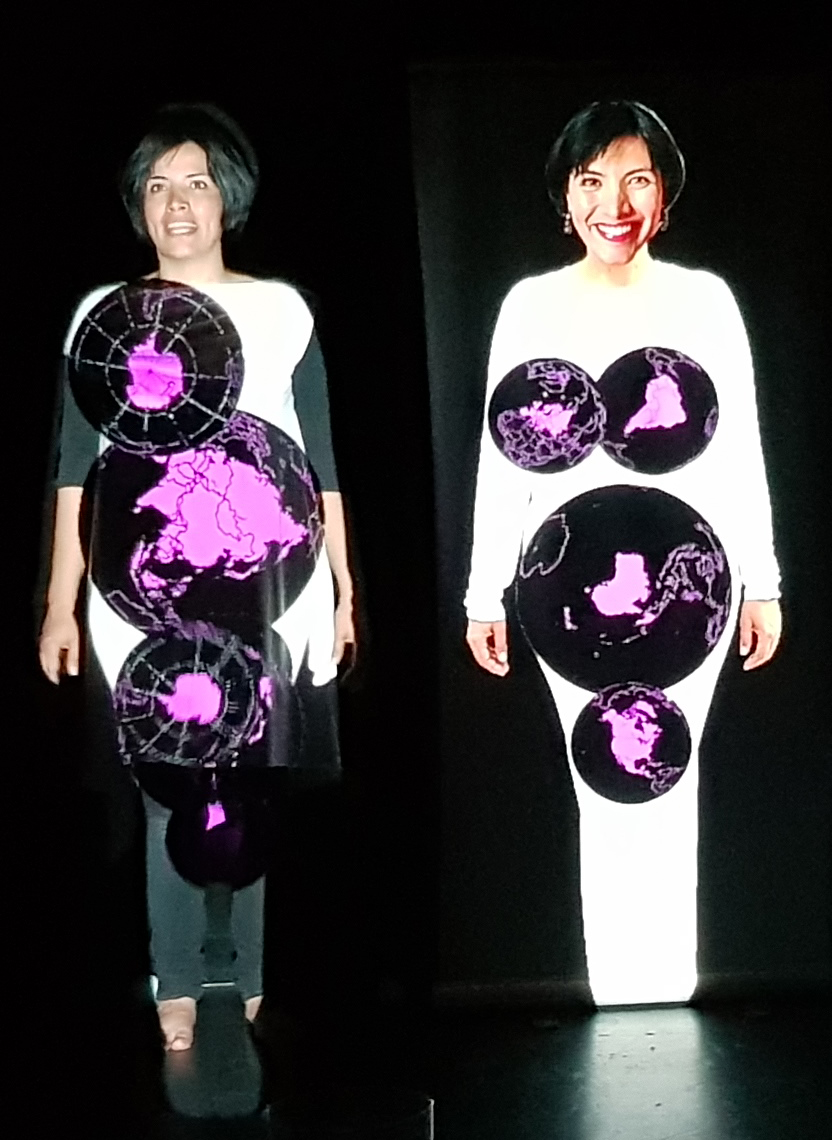 WHAT I DID NOT SAY is a multidisciplinary performance, about small and big violences that women cope with on a daily basis, related to their body, education, sexual abuse, insecurity and the social obligation of being pretty, quiet, smiling, productive and perfect.
Co-producers: Igneous, Mestiza Chile Festival and Amaranta Osorio
photo gallery
Submitted by Suzon Fuks on 3 December 2018.
send mail to
the Magdalena Project