Today is my last day in Santiago de Chile, I've been here for a month. Seeing the collaborations I did, I realized that the Magdalena, at times, makes the borders disappear. 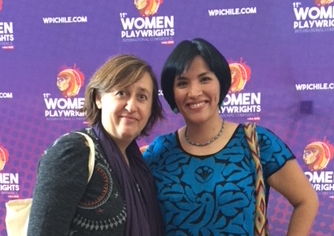 The WPI (International Conference of Playwrights) was founded in 1988 and since then, organizes a conference every 3 years. I was able to participate in the conference, thanks to the support of Acción Cultural Española, who financed my trip and the efforts of Ana López Montaner, director of Interdram.

On a typical WPI day, in the mornings there were workshops or networking sessions, (similar to speed dating, a bell rang and you had 15 minutes to talk to a playwright and then change of person). I participated in two sessions and it seemed like a great idea, because it gave me the opportunity to learn a bit about the work of several authors.

After the workshops, we ate and then the dramatized readings came (20 minute fragments were read). Unlike the Magdalena Festivals, several readings were programmed at the same time, so it was impossible to see everything. Every night, we saw a performance. From what I saw, I liked specially the work of the Colombian Carolina Vivas and the play of the Norwegian Lene Therese Teigen.

I participated in the WPI with the play "Moje Holka, Moje Holka" ("My girl, my little girl"), which I wrote with Itziar Pascual, author and dear friend, with whom I have already written three plays ("The trilogy of fireflies", that has won a couple of awards) and with whom I am writing a new project. The dramatized reading was directed by Verónica Moraga, who did a great job, with a great team: Maritza Farias, Carla Gaeta, Sofia Proxato, Juan Manuel Salgado.

In my opinion, the WPI was very well organized and for me it was inspiring because I met very interesting writers from different countries.

For those who are interested in participating, I tell you that the conference focuses on text based plays. There are three ways to participate: one can send a play, or propose a workshop or a show, to the selection committee of your continent. For you to know, the WPI does not cover accommodation or travel expenses, but as it is very well known, there are many possibilities to find funding. The next conference will be held in Canada in four years. I think a collaboration between WPI and Magdalena could be possible.

About the Residence in Domo Teatro and the Mestiza Festival 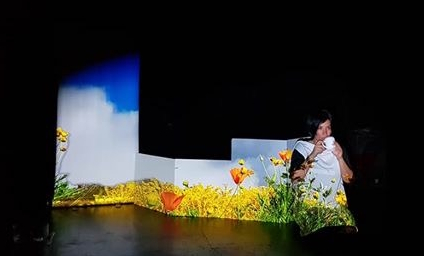 After the WPI, thanks to the generous invitation of Veronica Moraga and Antonietta Muñoz (directors of the Mestiza Chile Festival), I made a two-week residency at Domo Teatro. There, the Australian-Belgian artist Suzon Fuks and I continued with the creation of, "What I did not say" - a work that highlights the small and big violences that women face and also speaks of the need to dare to say what we have silenced. It’s a play that has been possible thanks to the generosity of Suzon and the team, but also thanks to many Magdalenas that have supported it.

We started working on "What I did not say" in a residence in Avignon at the Theater Artephile, where were Suzon Fuks, James Cunningham and Alicia Blas. On the last day, Marion Coutarel came to see the work and to give us feedback. For those who don’t know, Marion is preparing a new edition of a Magdalena Festival in Montpellier in 2019!

While in Santiago someone asked me: how is it that a Mexican woman living in France works with an Australian woman in Chile? ... I could only say, because the Magdalena network has no borders. I met Veronica at the women's meeting at the FIT in Cadiz, Suzon at the Transit Festival and I worked with both of them and met Antonietta at the Project "The Book of Space" directed by Jill Greenhalgh at the Odin Teatret in Denmark. It was in the network where I met these awesome women and wanted to create with them.

On November 1st, we presented the work in progress of "What I did not say" within the Mestiza Festival and it worked well, and we had great feedback to continue working (Thanks Geddy, Ileana and Mercerdes). 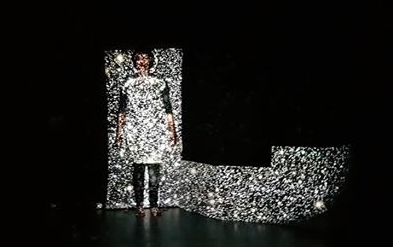 Right now, the Mestiza Festival is happening in Valparaíso. From the Mestiza Festival in Santiago, I want to highlight the quality of the shows. Several artists that I admire participated: Jill Greenhalgh, Geddy Aniskdal, Mercedes Hernandez, Barbara Biscaro. And I also had the opportunity to discover new works, the super Basque clown Maite Guevara and the circus artists Belén Celedón and Kikko de Maglie.

Ileana Diéguez made a very lucid exhibition about the painful Mexican reality. Andrea Lagos, who is now travelling beside me, made a beautiful site specific performance. In the Mestiza, we could see also the works of Maria Jose Jauguiberry, Heidrun Breier, Natalia Cuellar, Estefanía Aedo and Itzel Cuevas. And I found the installation "Re-incorporate" very interesting.

For me it was a gift to see so many friends and their creations ... I loved Chile, its people, the cuchuflis and I'm looking forward to returning. From here a huge thanks to Anto and Vero for the invitation and the generosity and another big thanks to Suzon.

Now I'm on the plane and I'm working on the Tantidhatri Festival, directed by my beloved Parvathy Baul and where I'm helping with the programming. It is a festival that will take place in Kolkata from January 15th to 20th and where I would love to see you all.

I think it's going to be an incredible festival, hopefully you can come. More info at: http://ekatharakalari.org/tantidhatri/

This festival is organized by a non-profit association and we have not yet got all the funds we need, so if you can be part of the festival or collaborate with something, it would be great. Here the crowdfunding info: https://sacsouthasia.org/donate-tantidhatri-2019/

I spent the month enjoying the company of Magdalenas, creating with some, receiving the support of others ... And the truth is that I feel privileged to meet and collaborate with so many Magdalenas... Lucky to receive so much love and support. I hope that the collaborations will multiply and that this network will continue to tear down the borders.

Submitted by Amaranta Osorio on 11 November 2018.
send mail to
the Magdalena Project