Jana Korb: Let’s envision even more possibilities for the future

Jana Korb is searching for interdisciplinarity and transcendence of traditional borders: by combining physical theater with circus arts, dance with aerials and new media… Thus she creates deep, condensed and touching theater pieces – using aerial arts as her physical expression and narrative.

Her world of aerial theater is painfully human, is about personal dreams and examines pure emotions. She locates herself within the field of critical theory and feminism, and approaches her creation through the social tensions of age, gender, and body.

We met each other at the Magdalena Munich festival in Munich, where Jana had her performance Erstes Leid/ First Sorrow and a workshop named Creation in ConfinedSpace. Also, she organizes Aerial Arts Festival that celebrates women in circus.

We are using this chance to present you within our local philanthropy program the work of Jana Korb, who inspires and motivates us!

Why it`s important to have feminist gatherings and festivals?

Feminist gatherings are very important because there still is a lot to do for true gender equality. It might seem that the world is improving regarding gender, racial, and other inequalities, but really the situation is not really getting better – and at some places it is getting a lot worse. In Europe we are facing a strong backlash, with gender and women`s issues being a big part of it. Even if on one hand people are getting more aware of inequalities, rape culture, etc., on the other hand, the structures are not really changing.

So if I look at my field – I am working in independent street theater and circus (without state funding) in Germany – the higher up in the hierarchy, the less women there still are, for example. It is very important to change structures, and for women to meet and find strategies how to change the world.

Another reason for feminist gatherings is, that if I cannot change the existing structure, I can try to make my own structure – if I do not succeed in this “normal”, male, white world, I can create my own world, where I`ll succeed and be happy. 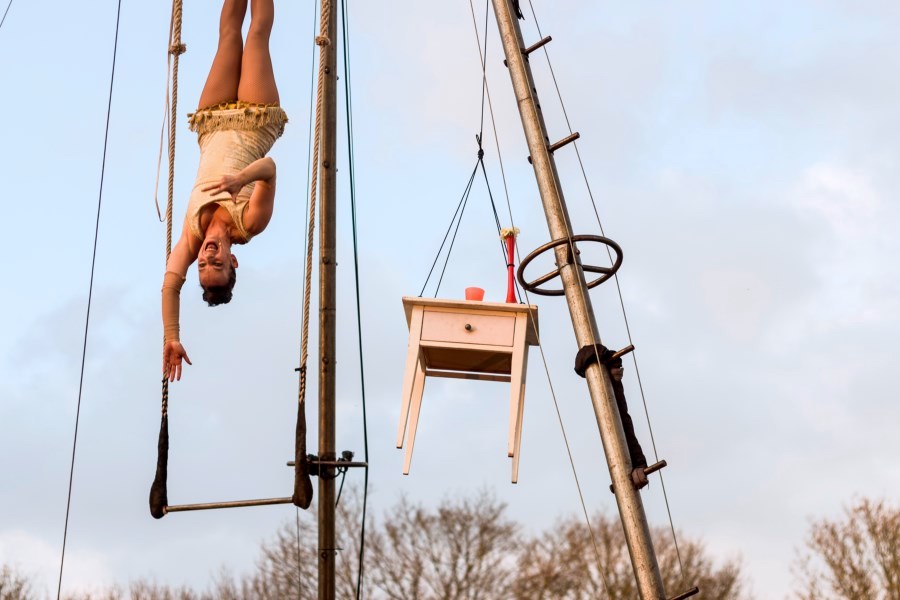 Do you think it is important to invest money in women`s issues and, as I speak with you as an artist, into women`s art and why?

Definitely, if you do not invest in women`s art, you invest in male art – meaning the art that is repeating itself all the time. This can be boring, not revolutionary, not interesting, not the art of the future. To create art of the future, theater of the future, you need diversity, you need everything, because that`s where discourse and visions for a better worlds are happening right now.

Women usually are the ones without money, so they have worse starting points from the beginning. So we need even more money here, because there is far less money than in male white cultures to begin with.

Do you know any feminist foundations?

I know many in Germany and Europe, but I hardly know feminist foundations that are meant purely for art and theater. Usually feminist organizations have to deal with social issues, like poverty, violence, motherhood, sex work etc., as money and awareness is lacking at every corner. So it sometimes seems like a very big privilege to spend money on art. But art is essential, not a luxury. We need more feminist foundations for feminist art.

What is for you the concept of solidarity?

Solidarity is very important, because we as women in this Western society (especially we white women) are very bad at solidarity – there is always competition and precarity. We are used to being just a few women in the male world, and are feeling threatended when another woman comes in, instead of showing solidarity with each other. Looking at the movement of black American women, e.g., and seeing their big solidarity amongst them and how they can form a movement, even some kind of revolution, makes me ask “Hey, why aren`t all women like that? Why aren`t women more like sisters with each other?” I find it very important to learn solidarity. We dismiss male networking as unethical, but networking is very important. We should learn from these old boys’ networks and have our own sisterhoods and ways to include people instead of competing.

Why in your work it`s important for you to raise visibility of women who are not visible in history? Why is this important?

First of all because they are amazing, interesting, and really stunning, beautiful women, we just enjoy finding out about. Apart from that, history has always been made by men, and there were so many women, who are just forgotten. For me it is important to say “Hey, they are not forgotten, they are here, they are everywhere”, and to show that other concepts of life are possible. That there are other models for us than motherhood and beauty.That women can be so much more – and have always been more!

Submitted by zoe gudovic on 6 January 2020.
send mail to
the Magdalena Project