I am in Providence, Rhode Island, for BIARI - Brown International Advanced Research Institute. This is a gathering of about 140 researchers and thinkers, brought together for two weeks of presentations and discussions in four streams: climate change, health and HIV, population and development, and theatre and civil society. I'm in this last group, convened by Erik Ehn and Patricia Ybarra, with 24 participants hailing from nearly every corner of the globe. We are at the end of the first week, during which we have covered an enormous territory of ideas and experiences. 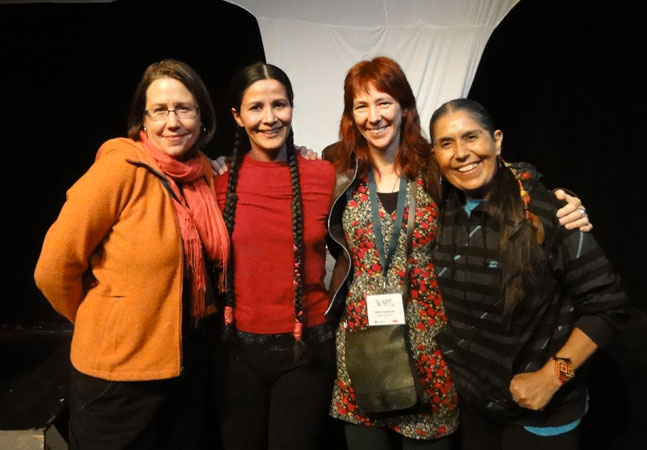 As well as presentations and discussions, during the last week we saw performances by Ana Correa and Violeta Luna. Providence is also the home of Vanessa Gilbert (organiser of the 2005 Magdalena USA festival), so there is something of a "mini-Magdalena" feeling. And there's one other New Zealander, Emma Willis from Massey University, also in the theatre group, so I get to have the kiwi connection too. All the others are new faces, and in our group we have people from Romania, Kosovo, Iraq, India, China, USA, Mexico, Chile, Argentina, Uruguay, Brasil, Uganda, Nigeria and Ethiopia. Most are not theatre-makers themselves, but come from a range of backgrounds including law, journalism, history and sociology.

A number of presentations have looked at the use of street theatre or performative protests in different contexts, such as the Indian women's movement, protest songs from the Ethiopian revolution in the 1970s, contemporary political theatre in public spaces in New Zealand and the Chilean students' theatrical protests of 2011. The latter in particular made me think about my own involvement in student politics in the early 1990s, and the creative campaigns I helped to organise such as a "Starving Scarfie Shantytown", mass wedding, and cheque-burning ceremonies. 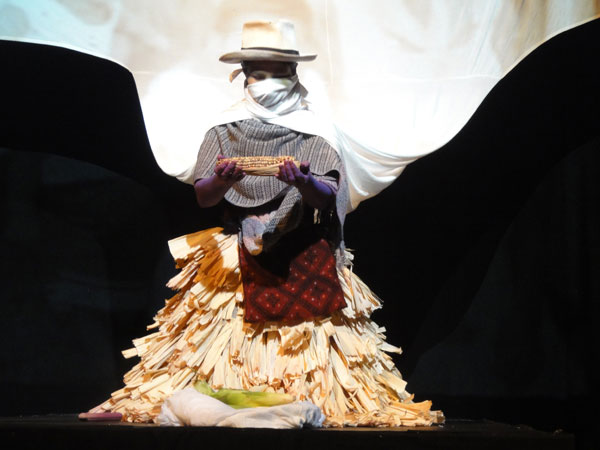 Both Ana Correa and Violeta Luna spoke generously about their work as well as showing it, listening to other presentations and spent time with us while they were here. Ana spoke about the evolution of Yuyachkani, the methods they have developed and the role of theatre in remembering and documenting. Violeta explained her concept of the body as a site for performance that addresses issues of colonisation, migration, exile, borders - poeticising the disposable body. She said that Mexicans don't talk about crossing the border, instead they say "the border crossed us", describing the unequal relationships created through the free trade agreement between the USA, Canada and Mexico; agricultural subsidies in the USA mean that it is now cheaper for Mexicans to import corn grown in the USA than to buy their own corn. Her performance (pictured at left) was a visceral expression of the imapct of the wintroduction of genetically engineered corn into the "body" of Mexico.

Mega Debin followed Violeta with a presentation entitled "Bloody Body Doubles: performance against violence in contemporary Mexico", suggesting that the artists' bodies stand in for the victims, providing testimony on behalf of those who cannot speak. The idea of "witnessing" had been raised in previous discussions, but after this presentation one participant asked whether witnessing is enough in situations of ongoing violence. We talked about the specificity of what is happening in Ciudad Juarez - how there are other places in the world where women work in sweatshop situations and live in poverty, but without the same extreme acts of sexual violence and murder. What is the difference here, what is motivting these quite specific, ongoing, attacks? Could it be connected to the pornography industry and in particular snuff movies? Megan showed an excerpt from "Las Nobodies" by Nayla Altamirano, who walked along the border gathering the bras of victims, which are left in the trees as a kind of macabre trophy by the rapists. (This made me think of the "bra fence" in New Zealand, a wierd tourist attraction where hundreds of bras have been cummulatively left on a rural farm fence; an apparently completely apolitical "joke" action - but in light of the bras from Ciudad Juarez it becomes somewhat sick.) Interestingly, the artists Megan presented who are making work about Juarez, are based in Mexico City; I thought about distance: how people need distance of time and/or location to be able to consider horrific events, as well as distance as a theatrical concept - the gap between actor and spectator that allows us to position ourselves in a particular way, to see things differently, to simultaneously suspend disbelief and yet be conscious that this is theatre.

Censorship is another issue that has come up in a number of presentations, and it was interesting to learn that artists from Iraq, China and Kosovo reported experienced less forms of control than those in countries such as the USA, Uganda and India. This control was exerted through lack of funding rather than overt censorship, but had the same effect of silencing or modifying the work to suit political agendas. Qing Hui Hou, from Grass Stage theatre company in Shanghai, said that her company was simply not famous enough to have attracted the attention of censors, while Amir Al-Azraki from Basra University explained that he writes his plays in English and presents them within the university. On the other hand, Violeta's work had been censored in the USA by lack of funding, Frederick Kekembo spoke about the NGOs directing the agenda of youth theatre, and Rukmini Sen mentioned an Indian street performer who was shot and killed by the police during a performance. Such overt state censorship acknowledges the power of theatre, its threat to the system. But there is also self-censorship which is disempowering and takes all kinds of forms, including tailoring our artworks to fit the agendas of funders and festivals. This connects to the inability to question, which Anita Cherian identified in her presentation about changes in Indian arts policy - the shifts in vocabulary and attitude leading to the arts becoming a terrain where creativity can be "farmed" for economic outcomes. She talked about the state's imperative to place a monetary value on emotions, which relates to the indexing of all life that is going on, such as the patenting of genomes, and the drive to map, measure and index everything, and expressed her frustration at intelligent people's failure to question this.

There have been many more presentations besides those I've mentioned, but the week has been so full I haven't yet had time to digest them all. We've also had the performances by Violeta and Ana which constantly come up in our discussions, opening up the theory with the practice. And I'm preparing for two make-shift events next week, so I have quite a lot going on in my head at the moment. Right now it's Saturday, and I'm taking a break from BIARI to visit Maria Porter - an almost four hour bus journey, but unexpectedly the bus has wifi so I'm making the most of the opportunity to write and post this.

Submitted by helen on 16 June 2012.
send mail to
the Magdalena Project