‘Not a very comfortable actress’ was a major influence in theatre

Margaret Cameron, creator of ground- breaking solo performance works including the acclaimed Knowledge and Melancholy and one of Australia’s most respected theatre practitioners, has died at her home on the Bellarine. She was 59.

Margaret was also an influential teacher, dramaturg and director, best known for taking her perception of the everyday as inspiration for her theatrical solo works. Yet perhaps what best characterises her 35-year artistic output is her philosophically poetic writing, which “does what it says and says what it does”.

Margaret insisted she was “not a very comfortable actress”. On stage this seemed not to matter, and her performances in the 1980s – directed by the likes of Jenny Kemp, Rex Crampthorn and Steven Berkoff – enamoured her to audiences and critics alike. She immersed herself in Grotowski-style theatre experiments, travelled to Bali and Berlin and forged alliances with all manner of artists, notably Hellen Sky, who became a lifelong friend.

A major influence was American choreographer Deborah Hay, to whom she was introduced by dancer and Alexander Technique teacher Jane Refshauge. To Hay’s proposition “The perception is the dance”, Margaret responded: “To audience is a verb,” thus beginning a perceptual practice which she applied to everything she did.

Margaret received many awards and grants, including Theatre and Literature fellowships from the Australia Council for the Arts. Almost all her work was first “audienced” at La Mama Theatre under its artistic director Liz Jones. Margaret performed interstate and abroad, in Denmark’s Odin Theatre, Barcelona (where she performed the proscenium in Spanish) and Aberystwyth, Wales, with Jill Greenhalgh.

She described herself as a “working artist” and often remarked on the extraordinary privilege of “making a life in art”. Around her own work, she mentored scores of artists such as actor Christopher Brown, singer Anna Liebzeit and writer Willoh S. Weiland, dramaturged My Darling Patricia, directed Dawn Albinger’s solo Heroin(e), conducted workshops at the Body Voice Centre with John Howard and the late Helen Sharp, and lectured at Victoria University for 30 years, profoundly influencing a generation of performers, theatre-makers, musicians and slam-poets.

Born in 1955 in suburban Burwood to Lorna and Thomas Cameron, she grew up under considerable economic hardship. Margaret was the youngest of eight, and in the busy household much of her nurturing was left to her sisters, with whom she retained a special bond. After attending school and private elocution lessons, Margaret initially enrolled in art and craft at the Melbourne Teachers’ College, but was saved by Lindy Davies who ran the drama school. Upon graduating, she moved to Sydney to seek her fortune as an actor.

During this period she was directed in Ulrike Meinhof Sings by actor Nico Lathouris. They fell in love and had a child, Yani. After their relationship ended, Margaret bought a house in Indented Head, a fishing townlet 90 minutes from Melbourne. Renovated by sometime partner Michael Hutchison and painted a searing orange, the house became filled with memorable treasures from op-shop expeditions. 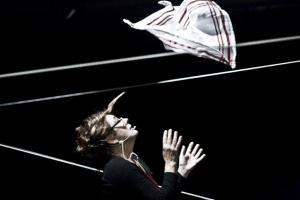 Margaret and I met during 2002 and in a dozen years we created some of the strangest and most particular works in our respective oeuvres. Highlights include A Quarreling Pair, based on the Jane Bowles puppet play for the arts company Aphids which played in Melbourne, Sydney, New York (at the original La Mama) and Rome. One of our last and dearest creations was The Minotaur Trilogy, a three-hour epic for Chamber Made Opera.

In January 2013 Margaret was rushed to hospital with what turned out to be cancer, but a partial recovery enabled her to premiere Opera for a small mammal. The Monthly described her tour-de-force appearance as “the culmination of a life’s work by one of Australia’s most important theatre artists”. In the same year, she completed her PhD, I Shudder To Think, preparing it for publication by Ladyfinger Press.

In her last months, Margaret wrote Lay Me Out, a 49-stanza poem that seemed intended as her adieu to family and friends, to her audience and to herself. With one stanza for each day of the Tibetan Bardo, it is filled with bursts of love, fear, beauty and an awareness that death was near.

For I choose innocence
As the first, second and third pages
To ride this bed to heaven
I choose to know the world through feeling
And its brilliance, light, and a sense of wit, of witness too
Releasing words that kill the dead and wake the living
Words with wings

Margaret’s ashes are buried in Portarlington Cemetery. She is survived by her son Yani (aged 30), mother Lorna (aged 100), brothers Garth and Michael and sisters Lian, Frances, Marie and Helen.