In June, I went rather spontaneously to the Prague Quadrennial; i knew quite a few people who would be there, & when Suzon offered a free bed where she was staying, I decided to go. I'd never been to Prague before & the festival seemed like it would be a good time to discover it - and it was.

The Prague Quadrennial is the largest festival of performance design and space, involving thousands of people from all over the world; it's been happening every four years since 1967. The size of it was quite daunting, especially as my spontaneity meant that I hadn't studied the extensive programme, so I arrived with little idea of what I wanted to see, apart from the people I knew there. The programme wasn't the easiest to follow, with several different versions all providing some but not all of the information. There were about six "sections" within the whole festival, each with its own programme and venues, and even the staff at the information desk were having trouble helping people find what they were looking for.

The main part of the PQ is a massive exhibition, rather like a trade fair, where each participating country is represented by a "pavillion" designed to showcase that country's performance design work. Some countries, like the USA, tried to include as many different works as possible, which is egalitarian but makes it difficult to take much in. Others, such as Iceland, went for a single concept. Most of the pavillions had programmes of events happening within them - a whole lot more programmes to get my head around! But I did manage to catch Joanna Sherman speaking about Bond Street Theatre's work in Afghanistan, and Carol Brown's performance at the New Zealand pavillion. 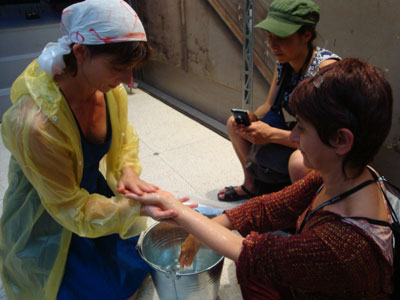 The New Zealand pavillion was a fly-tower, & looked like a rig for an outdoor concert, painted bright pink. Apparently the concept was about things that come up & down from above ... well, this was nicely incorporated into Carol's work, but I don't really know how it connected to the big black inflated thing that we could climb onto & go over, pausing on the way with our feet in the hidden artist's exposed hands before tumbling into the inflated cushion below. Fun for adults who long to leap around on bouncy castles but I'm not sure what it was about ...

The idea of having an exhibit for each country (there was also a student exhibit from each country as well) felt somewhat outdated to me; it's also a competition, which again is rather bizarre. How to compare such diverse exhibits, and choose one over the others? And why? Clearly enormous amounts of money were invested in some of the exhibits, & most of the work was from mainstream well-funded companies and individuals. There was surprisingly little that was edgy or even particularly innovative. For example, I didn't see anything about the use of the internet as a performance space (although apparently someone did mention it in a presentation, but more to dismiss it than to discuss it). I saw a lot of very high production values and well-executed ideas, but I didn't see anything that blew me away. This may also have been to do with the sheer volume of information - I know that I missed a lot - & the impossibilty to really focus on something or spend time with something. I did see some very interesting site specific/processional work - one where we followed a large group of singers through interesting back alleys and side streets of old prague, and another that led the audience in peddal-boats around an island on the river; this would have been great apart from the heavy cold rain! There were also some interesting things amongst the boxes exhibit.

I also did some great networking with friends & colleagues from New Zealand and other places, using the opportunity to discuss projects and do some collaborative work, and met interesting new people - although again, the size of the event meant that really getting to know new people was difficult; most were brief encounters. And I walked around Prague til my feet hurt, discovering places such as the underground Lapidarium and the green stone interior of the Nova Scena. We also found some good restaurants and, dodging hoardes of tourists, i saw the astronomical clock strike both midday and midnight (midnight was more interesting, even though nothing much happened) and tried absinthe ice-cream (not as good as the basil ice-cream i later tried). Overall it was very worthwhile to have experienced the PQ and Prague, although personally I prefer smaller festivals where it is more about meetings between people and less about competition.

some images and videos of PQ11

Documentary about Svoboda is a great resource!
the show Kretakor was a good food for thoughts. dont know if i liked it, kind of a reality TV show like Big Brother transposed for performance.  i put some images of PQ on flickr and videos on my blog post#1 & post #2

Was good to share some time with Helen and another friend from Belgium, and meet new ones!