The first meeting for the Magdalena Archive Project (M.A.P.) was held at Aberystwyth University over 12-13 September 2013. The aim of the meeting was to begin to plan for the long-term survival and accessibility of the large amount of material that has been generated since the project began in 1986. 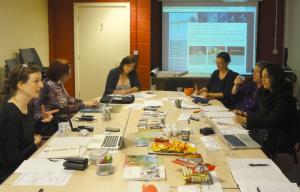 A variety of people attended, from the Magdalena Project as well as others from the university and the National Library of Wales. Professor Heike Roms chaired the meeting, which began with an introduction to the Magdalena Project by Jill Greenhalgh and Gilly Adams. Helen Varley Jamieson spoke about the web site and the existing digital archives, Selene D'Agostino spoke about the Transit Festival archives, and PhD student James Woolley, who is specialising in performance archive, spoke about his work cleaning and listing the boxes of Magdalena material that are here at the university. He brought some items - posters, news clippings and photos - to give a taste of the treasures that we have.

We then learned about some examples of existing performance archives: visiting professor Katja Rothe (University of the Arts, Berlin), spoke about re.act.feminism; Dr. Susan Croft presented Unfinished Histories: a digital archive of British Alternative Theatre; and Heike Roms presented her research, What's Welsh for Performance? These projects gave us a good background in some of the ways that ephemeral performance practices can be archived and how those archives are made accessible and brought to life through ongoing creative activities.

Ifor ap Dafydd and Mick Pearson from the National Library of Wales talked about the library, its processes, and issues to do with archiving, digitising and accessibility of material. The library receives deposits or donations of archival material, and since the Magdalena Project has its roots in Wales it is an appropriate long-term home for the material archives that we have in Wales. 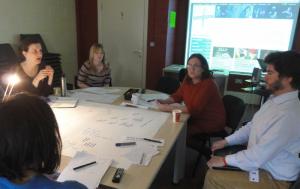 The second day of the meeting began with a screening at the National Library of Magdalena, the documentary film recently made by Jill Greenhalgh and Sara Penryhn Jones. Ifor gave us a short tour of the library, including its exhibitions and reading rooms, and explained how the public will be able to access our archives there. Back at the university we skyped with Maggie Gale to fill her in on our discussions the day before and hear her words of wisdom about how best to proceed and possible funding avenues. The afternoon continued with brainstorming about how to proceed. Others participating during the two days were Magdalena Project board member Steve Robins and Rhian James (a PhD candidate in digital archiving).

Concrete outcomes from the two days included confirming that the National Library of Wales will take the archives that are here in Wales as a deposit, and we will coordinate to gather other material from around Wales and to compile a list of what material other Magdalenas around the world have in their own personal archives. We will be contacting everyone who has organised a festival, as well as other individuals, to build this list. We have also set up a group on this web site to continue the discussion and organisation as we look into funding possibilities for cataloguing and making accessible a living digital and material archive of the Magdalena Project.

Very nice summary, thanks Helen (I think you undersold your own contribution though!). xx

I am sitting in Bristol University's Theatre Collection and I have in my hand the NRLA archive leaflet. The Drama department got a very large grant from the AHRC to digitize the extant videos from 25 years of NRLA. While their project isn't the same as our there are concerns in common.

'The NRLA Video Archive website includes three case studies exploring different appraoches to the archiving of live art online and offers users their own workspace to annotate videos and make links between works both within and without the archive, providing a uniquely valuable resource to artists, researchers and students of live art and contemporary performance practices'.

I  would imagine that Simon Jones (principal investigator) and Paul Clarke (co-investigator) could be useful people to talk to in terms of the launch of their project and its outcomes.