In late September, Magdalenas gathered in the balmy south of France for Magdalena Montpellier, a festival organised by Marion Coutarel in association with La Bulle Bleue.

The festival marked the culmination of Marion's three-year residency at this arts organisation for people with disabilities. It was a great location and the people of La Bulle Bleue were very present throughout the week.

For me it was one of those special festivals where I didn't have to present anything, so I was able to participate in a workshop and fully enjoy all of the programme. I thought that I would have time to write a blog post or two during the festival - but you know how it is; between performances, meals, getting too and from places and catching up with people, the time is quickly swallowed! The workshop I chose to do was led by Ana Woolf and Sandra Pasini, and it was a great pleasure (if painful for my thighs! the wind dance ...) to be moving and singing with the group. On the last day of the workshop we went out into the sunny grounds and sang to the trees and various people enjoying the sunshine. 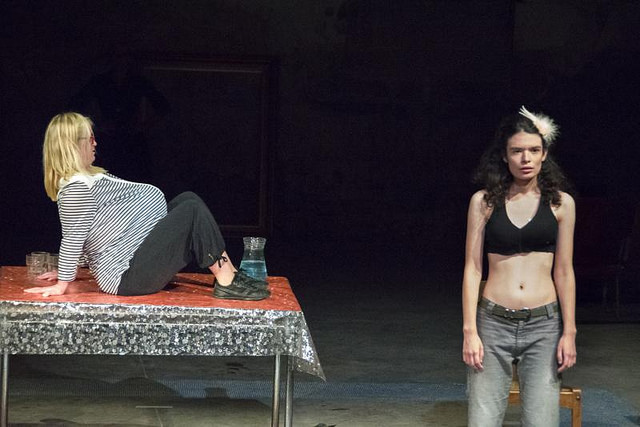 The performances and dinners were held at a different theatre each evening, which allowed us to experience some of the variety of performances spaces in Montpellier as well as bringing the festival to a wide general public. At each venue there were large festival posters, making the festival very present in the city, and the performances were promoted to and attended by the regular audience of each theatre. As well as the international artists there was a strong programme of work from local Montpellier and French artists, including contemporary dance and music.

There were several exhibitions: "Je T(Embrasse Carcasse" featured photographs of the actors at La Belle Bleu; photographer Marie Clauzade had followed their work for a year to create the exhibition. Kordula Lobeck de Fabris presented "Invisible Spaces", material including texts, videos, music, photographs and installations from art project in prisons - allowing the inmates to virtually escape their boundaries through their artwork. And on the last day of the festival, a collection of visual art and poetry magically manifested in the little cafe thanks to Gabriella Sacco; it vanished again almost as quickly as it had appeared, leaving me holding a little scroll of paper and wondering if I'd dreamed it.

An interesting part of the festival were the "Comment Dire?" sessions: Marion had invited three artists at the early stage of a creative process to share their research questions with a group in order to "shake up accepted prejudices." I chose to attend Marie Clavaguera-Pratx's session about people living underground, because the description made me very curious. I wondered whether "underground" was meant literally or not - and it turned out to be just that: literally underground. Marie told us about underground communities in all kinds of places from Siberia to New York City, where some people are living 14 stories below ground and never come up to the surface. After the first afternoon discussing the topic, in the next session she asked us to do some physical improvisations based around how we imagined these people might live and respond to certain situations. I don't know how useful this was for Marie's research, but it was a hilarious afternoon for us all (I will never forget Coline's determined and ultimately successful efforts to remove her top without using her hands or arms - it was side-splittingly funny!). 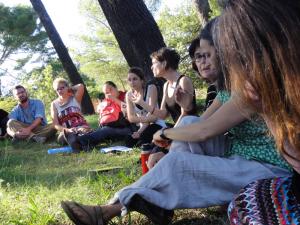 The weather was balmy, the food was excellent, the company was warm and inspirational and the work was excellent. Congratulations to Marion and her team, and La Belle Blue, on a really successful festival.