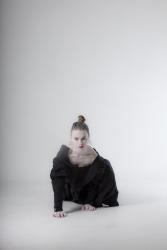 Barcelona
Spain
About Me:

Director, researcher, choreographer, dancer, butô dance teacher, actress, improviser and performance artist. She made her first stage direction in Vienna, in 1995. She trained in theatrical art with Jacques Lecoq in Paris in 1998 and with Philippe Gaulier in London in 2000. She studied dramaturgy with Michel Azama in 2001. She created her first solo "LIMIT" for the FIU of Salamanca. During the creation in Paris she meets butō dance with Yumiko Yoshioka in 2002 and it is a revelation: butō is placed in between theater and dance, an expressive artistic path of scenic freedom. She creates «FEM.», a solo influenced by butō, both in the movements and in the poetic writing. She continues her butō dance training in several cities of the world such as Tokyo, Berlin, New York, with Yumiko Yoshioka and several masters, especially with Yoshito Ohno, Daisuke Yoshimoto, Atsushi Takenouchi. Over the years she creates numerous solos, latest piece «Secret Hymn» 2017 Bcn; several duos, latest piece «UME» 2019 Barcelona, with Rocío Fraile; and pationated in directing and choreographing solos and very diverse groups of pro / amateurs / children, always revealing an art «on the edge», on the thread of the sword. As a performance artist she invests peculiar spaces in festivals and galleries, valuing the unique specificity of the moment,  « site-specific performance art ». Pushed by her masters, Marlène develops her butō dance pedagogy since 2007 in Paris, focusing on artistic research. She lives in Barcelona, ​​and directs, creates and dances, gives butō dance workshops this season also in Asturias, Madrid, Ibiza, Portugal, Paris and Vienna.
«My art is a peaceful warrior who, ready to dance, seizes the moment.» M.J.