As you may know, we have been preparing for our annual Myth and Theater Festival beginning June 22 until July 4th at the Roy Hart Centre in the South of Franch. Of course, we want to attract your interest and would love to have many of you among or with us online.  A festival is supposed to be a celebration - and for us it is a celebration of the imagination.

A more than serious affair as well, because I dare to claim that the theme of the festival, Superstition, lies at the heart of a contemporary anthropological reflection - like a positive virus - to make us think differently about the present state of the world. One of our guests, the philosopher Xavier Papaïs, does not beat about the bush: "We are witnessing the disappearance of psychoanalysis, and of the left."  An other speaker, Sonu Shamdasani, historian of psychology and editor of Carl Jung's Red Book, invites us to comment on the first chapter of Antonin Artaud's The Theater and its Double: The Theater and the Plague.

The Festival subtitle: Superstition / A Performance Take, points to an inclusive understanding of superstition in performance.  I have written before that, for us artists, superstition is a boon, a state of alertness that is sharp and clear-sighted, both smart and cautious, especially when it comes to assessing signs and acting on them — A way of welcoming spirits: INSPIRATION.

Myth and Theatre Festival
SUPERSTITION
June 22 - July 4
In Person | On Line
Register
Payment meathods differ from within or outside the EU. For assistance with lodging at Malerague write to us directly at linda@pantheatre.com  Detailed festival information
A godsend: alert, shrewd and cautious when opening the gates to premonitions, daemons and quirky moves. A way of letting the spirits in: INSPIRATION.

The capharnaüm and bric-a-brac of superstition are under the guard of Anubis, the Egyptian jackal god, guardian of the passage to death: a divinely alert presence. We will make him the god of superstition for the needs of our approach: a performance take.

The Myth and Theatre Festivalis context for talks and workshops and performances, for the exploration and study of the links between mythic thought and performance practice. Founded in 1987 under the presidency of James Hillman.
June 22 - July 4th
In Person | Online (Evenings 19h Paris) 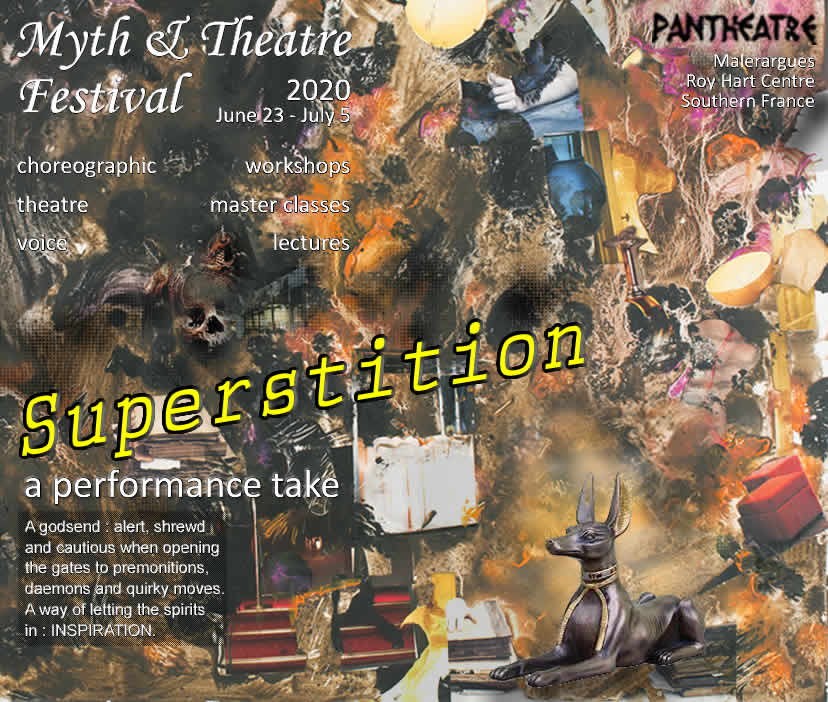