I've been living in Munich for five years now, although most of my artistic work has still been elsewhere; but as my German slowly improves, I'm beginning to create opportunities and projects locally. Since the Magdalena Project is an important part of my life, I wondered about the possibility of organising a Magdalena festival here in Munich, whether there might be a need and desire for such a thing. But how to find out, when I'm a foreigner who doesn't speak the language very well and my networks within the local theatre and arts communities are limited?

I decided to try and organise an initial meeting, in order to introduce the Magdalena Project to interested people in Munich, and see what might come of it. When I shared this idea with Dorothea Seror, a local performance artist who I'd met, she was enthusiastic and immediately agreed to help organise the meeting. I then approached Christina Eder, who is responsible for "gender mainstreaming" within the city's department of culture, and she too was enthusiastic. So Dorothea and I put together a weekend programme, enlisted a team of helpers, and organised "Magdalena München - Erstes Treffen" (First Meeting) over the weekend of 5-7 June 2015. 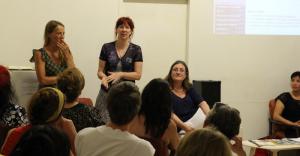 We began on Friday evening with a screening of the Magdalena documentary film and presentations by Jill Greenhalgh, Amaranta Osorio, Yamile Lanches, Jana Korb and myself. Jill spoke about her decision to stop struggling to win a place in existing power structures and instead create an alternative, non-hierarchical structure with the Magdalena Project. Amaranta, Yamile, Jana and I all spoke about our personal experiences of participating in Magdalena festivals and being part of the network; Amaranta also talked about organising festivals in Mexico and Madrid, and I spoke about the role of the website in the international network. I hoped that we would be able to convey to the audience something of the essence of Magdalena. This is a difficult task, since it's all in the actual experience, which is different for everyone; but the variety of presentations combined with the documentary worked well and the response from the audience was good. Many questions about the Magdalena Project were asked afterwards and over the next two days.

The workshop on Saturday was called "Wir lernen uns kennen", or "Getting to know each other" - since many of the local participants had not previously met, it was important to allow time for them to share and exchange their work. We made time for short presentations and many had brought material such as catalogues, books, flyers, masks and instruments. A wide diversity of practice was represented, from clowning to scenography to conceptual art and a whole lot else in between. We included physical and vocal training in the day, starting with a warm-up led by Jana, then Amaranta led a movement and devising exercise, and Yamile taught us two Colombian songs. In the afternoon, Dorothea led a physical exercise and Dimple B. Shah taught us an Indian song. The training helped to bring everyone together as a group, as well as illustrating the importance of training, and exchange through training, within the Magdalena Project. 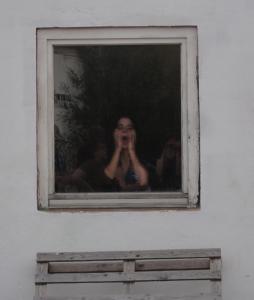 A programme of performances was presented on Saturday evening, curated by Dorothea and followed by a shared meal prepared by the Laborküche of the Institut für Glücksfindung - one of the organisations based at the Kreativquartier, where the weekend took place. The Kreativquartier is part of a former industrial area in Munich which is currently used for artists' ateliers and organisations, arts venues, alternative groups and other activities. Dorothea and most of the helpers have ateliers here, and there is a strong community who supported the event in different ways, such as the Foodsharing group providing food, Laborküche's cooking, and individuals providing technical equipment.

The five performances were "Licence to Scream No. 2" by opera singer Roni Weiser (Israel/Germany); "Karmic Connection II" by Dimple B. Shah (India); "The Thousand and One Nights of Natacha" by Natacha Rimer (France/Israel), pictured at right; "First Sorrow" by Jana Korb (Germany) and "Boden" by Raquel RO (Spain/Germany). They were presented outside as dusk slowly fell at the end of a hot sunny day, with storm clouds gathering ominously. As always when I'm organising an event, I find it impossible to really focus on the peformances; I was distracted by things such as realising we needed to provide water for the over-heated audience and helping to organise that, worrying about intrusive noises, quietly greeting people, and all the time keeping a nervous eye on the approaching thunder storm. My memories of the performances are therefore fragmented: exchanging a moment of quiet intimacy with Dimple; Natacha's hypnotic twirling; an elderly lady leaning out of her apartment window across the street to watch Jana on the trapeze; Raquel's flamenco, then drawing with shells; and all punctuated by Roni's beautiful and humorous songs.

After the performances we made a quick decision to move the dinner tables under cover, which proved wise as we were treated to a spectacular thunder and lightning storm as we ate - the finale performance of the evening. The food was delicious and much appreciated by all who stayed for the meal, and in typical Magdalena fashion there were intense conversations across the tables.

The final event of the weekend was a meeting for all those interested in continuing something; I expected that only a small group would come - people would be tired, they'd want to sleep in or go to the lake since it was another beautiful day, or be with their families ... but no, 30 women turned up at 10am on Sunday morning, eager to discuss what they'd experienced over the weekend and what might happen next. I was impressed! We gathered outside in the shade and Jill started off the discussion by speaking about the fundamental qualities of a Magdalena festival, that it isn't a set of rules but rather a fundamental ethic of trust in doing something well. She said how difficult it is to organise a festival, that there has to be real a need at the centre of it, and stressed the importance of attending one of the several upcoming Magdalena festivals, for anyone who wants to be involved in organising one in Munich.

There was discussion about the difference between performance art and theatre; the weekend attracted more "performance artists" than "theatre artists", due to the networks of people involved in organising and the venue. Some of the German participants explained that artistic disciplines are still highly segregated in Germany, that it's difficult or even impossible for "performance artists" to be able to work in theatre venues, and spoke of the need to find a way to break down these borders. For example when seeking funding for a project, it has to be either theatre or fine arts, there is no option for something that falls between the two. Personally, I see "theatre" as an overarching inter-disciplinary artform that can encompass all performing arts, including "performance art", and I don't make clear boundaries between art forms. But I realise that many people have a negative reaction to one term or the other, and since my experience of applying for artist's health insurance here I have a pretty good understanding about the specific boxes of artforms that exist in official Germany. (I've never been one to fit neatly into a single box!)

We ended the weekend in true Magdalena style with a closing round, during which most people expressed an interest to continue with something, whether it be a Magdalena festival or more networking and exchange at a local level, and said that they had gained an understanding of the Magdalena Project; several indicated that they would like to attend one of the next festivals. So I feel satisfied in achieving my aim of introducing the Magdalena Project to people in Munich. The weekend was also very worthwhile for many in terms of local networking and personal inspiration.

It's clear that there is a strong need for networking locally, and time will tell if there is also a need and desire for a Magdalena festival. This was only the first step; the next small step will be a meeting for those who are really interested to make a festival happen, and to continue to reach out to women theatre makers in Munich and Germany. Meanwhile I need to keep learning German, keep networking locally, and keep going to Magdalena festivals ... see you in Montpellier!

"Magdalena München - Erstes Treffen" was realised with support from Landeshauptstadt München Kulturreferat; Bezirksausschuß 9 Neuhausen/Nymphenburg; doku e.V.; Leonrod-Haus für Künst; Institut für Glücksfindung; foodsharing.de. Many thanks to Doro for so willingly coming on board with the organisation and funding, and also a lot of thanks to the organising team and helpers: Raquel Rodriguez, Maria Berauer, Yamile Lanches, Martina Marini Misterioso, Laia Marti Puig, Andrea Aß, Thomas, Christina Maria Pfeifer; and the artists!

Submitted by helen on 27 June 2015.
send mail to
the Magdalena Project