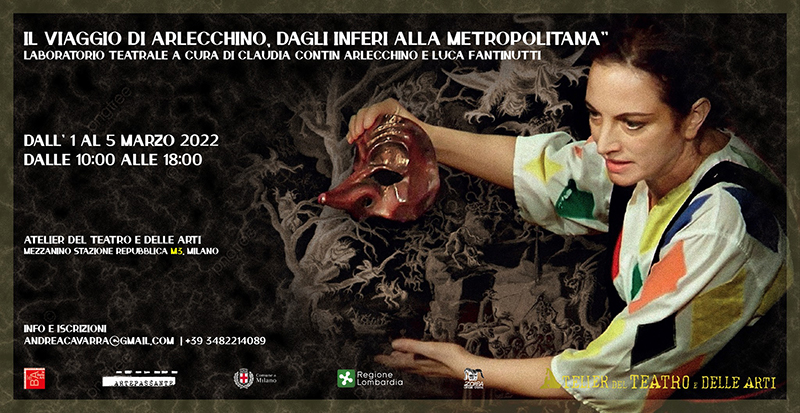 The long-awaited return of the masters Claudia Contin Arlecchino and Luca Fantinutti in live educational activities will resume in 2022 from the Atelier del Teatro e delle Arti of Milan, with a didactic project aimed at renewing the sources of inspiration for the new generations of Italian comedians. All the most effective artistic avant-gardes of the twentieth century have never stopped referring to the Commedia dell'Arte as a source of knowledge and renewal for contemporary theater. Claudia Contin Arlecchino and Luca Fantinutti are committed to carry into the Third Millennium the skills and the highly qualified theatrical craftsmanship that Commedia dell'Arte can make available to the actors of today and of the future. In this first stage in Milan, the polymorphism of Harlequin and his masked companions winds through time to re-emerge in our urban realities, with renewed joy and satirical vital force.

The specific program, dedicated to the location of the Milan Subway, will focus on the time travels of Harlequin and his "Wild Masnada of Masks". The figure of Harlequin has accompanied over the centuries, and continues to accompany, the cathartic laughter of the souls of the living and the dead. The first encounters took place during the raids of the ancient Hellequin, of whom we have news since the XII century in the testimonies of the wandering monks and in the carnival cultures of all Europe and then through the " Theatrical Journeys " of the Italian Comedians who made him known all over the world. A couple of centuries before the great diffusion of the Commedia dell'Arte, in the XXI canto of the Inferno of the Dante's Divina Commedia, Dante describes a nice brawler Alichino, among the funny and grotesquely playful devils of the fifth bolgia of the eighth circle. In the sixteenth century, Tristano Martinelli was the first comic actor to have explicitly chosen the name Harlequin for his mask. Even today, the figure of Harlequin is shrouded in the seemingly contradictory mystery of its antiquity and its relevance. Claudia Contin Arlecchino and Luca Fantinutti are gathering these infernal legacies of the juggler, bringing them back to the contemporary scene in places that are alternative to theaters, that is, along the streets, in subways and railway stations. In this amusing didactic, iconographic and theatrical journey, Claudia Contin Arlecchino unveils the secret messages contained in the ancient engravings depicting the funny devils, the proto-Harlequins, the ancient Hellequin, the jesters, the wild men of the dancing carnivals and the great professional Harlequins of the history of Commedia dell'Arte that have inspired her in her work. The author also recounts the stories and projects of those artists who, between the twentieth and twenty-first centuries, in choosing Harlequin as a model or inspiration, helped to create a new contemporary Harlequin iconography.