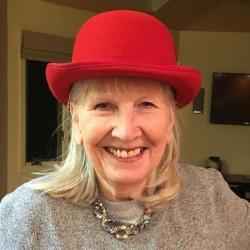 Flloyd Kennedy is an Australian actor, writer, director, singer-songwriter, performance poet, voice and acting coach. In the UK from 1967-1996 she took part in the folk revival, performed street theatre, cabaret and fringe theatre, and was Artistic Director of Golden Age Theatre (Glasgow). Back in Brisbane in 1997, her directing credits included Madama Butterfly, A Life in the Theatre, All’s Well That Ends Well, Faith Hope and Charity, Brave New World Order, and she has performed for Gyre Theatre, Trocadero Productions, Crossbow Theatre, Tempest Productions, THAT Production Co, Full Circle Theatre and many short films.

She returned to the UK in 2015 to teach voice at E15 Acting School for a year, then moved to Liverpool where she now lives. She regularly performs at Open Mics and local music and arts festivals.

Flloyd’s voice coaching practice is Being in Voice and she is Artistic Director of Thunder’s Mouth Theatre. Her plays, The Fall of June Bloom (or What You Will), and Yes! Because...have been presented in Brisbane Qld, New York NY and Phoenix AZ, London, Liverpool and Edinburgh. Flloyd blogs about all things voice and theatre at www.beinginvoice.com/blog, and her podcast "Am I Old Yet?" can be accessed on www.flloydkennedy.com/podcast. Her two published poetry collections, "Sunsets & Kites" and "Home is Where I Hang My Pot" are available on Amazon.